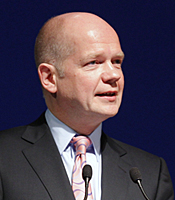 One of the UK’s most renown and respected orators, and a prominent political leader for more than 20 years, Lord William Hauge first grabbed the headlines when he addressed the Conservative conference as a 16-year old activist.

Born and raised in Yorkshire, after attending a local comprehensive school he studied at Oxford and INSEAD. Following schooling and an early career at management company McKinsey & Co, he went on to become MP for Richmond, Party Leader, Foreign Secretary and Leader of the Commons.

At the Foreign Office, William's portfolio covered events in Syria and Libya, the removal of British forces from Afghanistan, Russia's annexation of Crimea, the terrorist threat and relations with the EU. He travelled more extensively than any of his predecessors, and put added diplomatic focus on the UK export drive.

Closer to home, William Hauge led the negotiations that resulted in coalition Government with the Liberal Democrats. A combination of foreign and domestic roles gives him rare insight into the body politic and the causes behind growing global instability. As well as shining a light on geopolitical developments he explores the impact of economic trends, advances in tech, migration, demographic change and the growth of religious fundamentalism.

Having known many global leaders, he speaks from rich experience about different styles of leadership – drawing on numerous debates with Tony Blair and first hand knowledge of the world's Presidents from George W Bush to Vladimir Putin.

Away from politics William has built a reputation as a best-selling historian. He lives in Wales and Yorkshire with his wife Ffion. He continues with his humanitarian work, including the Preventing Sexual Violence in Conflict Initiative which he co-founded with Angelina Jolie Pitt, and work to combat the illegal trade in wildlife.

Lord William Hague is a seasoned raconteur (lauded by Hillary Clinton as “the David Beckham of toasting”). With true Yorkshire wit and natural comic timing, he reveals his favourite tactics at Prime Minister’s Questions, the many and varied leadership styles he’s encountered during his high-level political career, and the pitfalls of politics and the disasters caused when media, drink, politicians and debating come together.

William was awesome. The perfect balance between humour and serious content.

Clients often ask about purchasing books for giveaways and delegate packs. Below you’ll find a selection of products by Rt Hon Lord William Hague. Click the images to view on Amazon's website. For bulk orders, please speak with your Booking Agent.

How to book Rt Hon Lord William Hague for your event