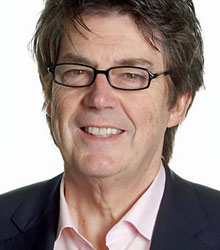 Mike Read has won ten National Broadcaster Awards and been awarded the Gold Badge of Merit by the Music Association for his special contribution to Britain’s music industry.

A household name in Britain for over 35 years having fronted three top-rated long-running TV series, Top of the Pops, Pop Quiz & Saturday Superstore and three national radio breakfast shows, including Radio One and Classic FM.

A best-selling author, he has had thirty-six books published, including his autobiography, Seize the Day, which came out in October 2014 and Forever England, a biography of Rupert Brooke, published in January 2015. Mike has written eight stage musicals and songs for over forty major artists including Cliff Richard, The Bee Gees, Boy George, Gene Pitney, Don McLean, Brian Wilson, Barry & Robin Gibb, Donovan, David Essex, Steve Harley, Peter Andre, Justin Hayward and many others.

His compositions have also been recorded by HM Band of the Royal Marines, The King’s College Choir, The Eton College Chapel Choir and The Rodolfus Choir. Mike has had several chart hits and twice topped the Independent singles chart.

He is Chairman of the British Plaque Trust, Chairman of the Lords and Commons Entertainment Committee and was created a Knight of Malta in 2011. His British Plaque Trust and previous Heritage Foundation work includes the erection of many Blue Plaques, giving talks to history societies and being an integral part of the team that started the Bomber Command Memorial Fund. Mike founded the Rupert Brooke Society at Cambridge, creating a museum at Brooke’s former home and chairing the Society for many years.

He currently broadcasts for BBC Berkshire and Bauer’s Greatest Hits Network. He has been a regular on Sky News Paper review for five years and many other TV shows.

Clients often ask about purchasing books for giveaways and delegate packs. Below you’ll find a selection of products by Mike Read. Click the images to view on Amazon's website. For bulk orders, please speak with your Booking Agent.

How to book Mike Read for your event