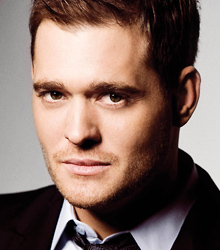 Michael Bublé has established himself as the modern day King of Swing. His soulful appeal compares to the way Sinatra introduced jazz to many a household for the first time and his passion for everything jazztastic translates not only into huge record sales, but also brings him a wealth of admirers internationally.

In 2003, Bublé's self-titled first major album was released and it was a huge success worldwide – eventually going multi-platinum in many countries and reaching the top ten in the UK, his homeland Canada, and hitting number one in Australia. The debut album incorporated Bublé's multi-faceted talents, especially his aptitude for lending a pop style to old classics such as 'Fever', 'Moondance' and 'How Can You Mend A Broken Heart?'. A world tour duly followed and 2003 was rounded off with a special release of Christmas tunes 'Let It Snow'.

Aged 28, Bublé had officially arrived on the international music scene. He won the New Artist of the Year category at the Juno Awards in 2004 (the Canadian equivalent of the Grammys) and was narrowly pipped to the post for Album of the Year.

His third album release 'It's Time' in 2005 topped the success of his debut with even more astounding record statistics, selling over five million copies worldwide and remaining on the Billboard Jazz charts for a staggering two years. The single that rung out most in the fans' ears was 'Home', specially penned by Bublé for his long-term love at the time. The song shot to the number one spot in more than 10 countries worldwide and had the distinction of being the most-played song on Canadian radio that year, with an estimated 382 million people tuning in to sing along.

The third studio album release was always going to be a tough battle against the success of his two previous studio releases. Call Me Irresponsible was released in 2007 and Bublé's fears proved unfounded as both critics and fans leapt to sing his praises. The album debuted at number 3 in the Canadian charts.

Thanks to the efforts of his music-loving grandfather when Bublé was just a small child, he has achieved in a relatively short time what many musicians struggle to find in decades. His success has continued to grow with every new studio release and it isn't hard to imagine him selling out tours and topping the record charts for a very long time to come.

Clients often ask about purchasing books for giveaways and delegate packs. Below you’ll find a selection of products by Michael Buble. Click the images to view on Amazon's website. For bulk orders, please speak with your Booking Agent.

How to book Michael Buble for your event