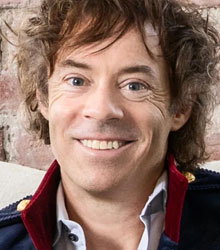 Michael Acton Smith is the perennial entrepreneur and believes that start ups are the engines of human liberation. With Calm.com, he's on a mission to make the world a happier and healthier place.

Michael is also the founder of entertainment company Mind Candy and creator of the global kids phenomenon Moshi Monsters. He has been described by The Daily Telegraph as "a rock star version of Willy Wonka" and by The Independent as “a polite version of Bob Geldof”.

He studied Geography at the University of Birmingham where he met Tom Boardman and the two became best friends. During 1998, whilst in their early twenties, they founded online gadget and gift retailer Firebox.com with a £1,000 loan from one of their mothers and with rent-free space in her attic.

It was aimed squarely at the ‘lads' market, and Firebox's breakthrough moment came in the form of the “Shot Glass Chess Set”, an idea that was born during a drunken night at the Union Bar! Within five years they were listed by The Sunday Times 'Fast Track 100' as the 13th fastest growing, privately owned business in the UK.

Michael confesses to his naivety about business in the beginning, but was determined that, with no other competitors in the market, their idea couldn't fail. They set about absorbing information from every publication and source they could get their hands on in order to gain the help they needed to drive the company forward.

Following their success with Firebox, Michael secured £10m backing and launched Mind Candy in 2004. The next three years were spent developing a game called ‘Perplex City'. Aimed at 18-30-year-olds, ‘Perplex City' was an alternate reality online game with a real life £100,000 prize up for grabs. It drew critical acclaim and gained positive press coverage, being hailed as the future of gaming and even receiving a BAFTA nomination in 2006, but it only attracted a niche audience and commercially it flopped. So, having spent £9m of development funds, Perplex City was eventually placed on indefinite hold.

With just £1m left in the bank, Michael took a final roll of the dice. In 2007, having been inspired by the growing success of Facebook and kids brands including Tamagotchi, Mind Candy launched online world Moshi Monsters.

In 2012 Michael was awarded 44th place in the Guardian's, MediaGuardian 100 and Tech Guru 2012 in The Guardian Digital Innovation Awards. In 2011 he was voted 12th in Wired's Top 100 of Britain's Digital Power List. He was also appointed OBE in the 2014 New Year Honours for services to the creative industries.

However, Michael had reached breaking point. He was forever tired and suffered from headaches and the joy of work had faded to a dull ache. So in 2012 he took a much needed break — went on long runs, played tennis and read a lot of books on a subject that he kept hearing about: mindfulness.

Before this trip, Michael had been intrigued by meditation but had always been too busy to give it a try. He discovered that guided meditations helped enormously and the more he practised the more he managed to tame his mind.

He began to discover the many benefits that flow from having a strong, focused, calm mind and felt like he’d stumbled across a secret power. He returned to work in London rejuvenated. He was fired up and ready to take on anything.

“Calming the mind is not about switching off and retreating from the bustle of life. It’s a superpower that rewires our brains, changes the way we see the world and helps to unlock our true potential." Says Michael.

And so Calm was born.

It was named iPhone app of the year by Apple in 2017, started with a focus on meditation but has broadened its scope to other well being issues such as curing insomnia.

In 2022, Time magazine listed Calm as one of the world’s most influential companies, alongside Apple, Disney and others. It’s also an Apple Best of 2018 award winner, iPhone app of the year (Apple, 2017) and Google Play Editor’s Choice 2018. In 2020, Calm was valued at more than $2 billion USD.

Michael Acton Smith has long been fascinated by neuroscience, flow states and mental fitness. Learning to meditate had a profound impact on his life and he is passionate about spreading this simple but valuable skill around the world.

Michael Acton Smith has been immersed in tech and start ups for over two decades. He is an inspirational speaker on the digital economy, disruptive innovation, the entrepreneurial mindset, neurodiversity, mental health and wellbeing.

Early failures and market crashes didn’t stop Michael Acton Smith making millions from a free game – but just how did he do it?

Following the immense success of Firebox.com, Calm and Mind Candy, Michael Acton Smith is often asked to share his success stories with the corporate sector. As one would expect of such a gifted entrepreneur, Michael’s presentation style is fun, enthusiastic and has a powerful underlying message of overcoming obstacles, sailing through the turbulent times and never ever giving up on the dream.

Michael tells the story of his entrepreneurial adventures and shares the lessons learned along the way. He believes it’s vital to dream big, but when you’re starting out its important to focus on one problem at a time.

Once you’ve cracked the solution and you’re the best you can be, then you can expand. “I see too many start ups trying to juggle too many balls” he explains. Michael’s advice is to learn from other entrepreneurs even if they’re not in your industry, what you learn is that everyone makes mistakes.

He also speaks about building winning teams and growth culture, marketing insights that make the difference, entrepreneurship and innovation as well as building mental health through better mental fitness and well-being at work.

He is outspoken about the need to reduce the stigma around mental health, both in our private and work lives. These are issues he is tackling head-on through his pioneering work at Calm.

Michael Acton Smith was the best speaker I have ever heard, his story was great to hear and he very much related his speach to the audience. He was extremely engaging and ensured that the audience heard of his experiences - good and bad! Completely professional but also extremely friendly and happy to talk with all delegates.

Michael provided a highly inspirational speech for the National B2B Centre's E-Business 2008 conference. Delegates were particularly motivated by his approach to overcoming adversity on the way to achieving great success with Firebox.Com. Thanks Michael!

I saw Michael Acton Smith at the National B2B conference this year. He was one of the best speakers I have ever seen and heard. He adopted a creative approach and it was a truly passionate presentation. We were laughing so much that we forgot this was meant to be a business event! More companies and Chief Execs should hire Michael to open major events.

How to book Michael Acton Smith OBE for your event