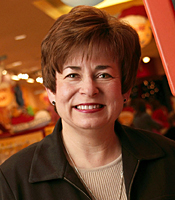 Maxine Clark is one of the true innovators in the global retail industry. During her 30-year career, her ability to spot emerging retail and merchandising trends and her insight into the desires of the American consumer have generated growth for retail leaders, including department store, discount and speciality stores.

Maxine Clark has been “Chief Executive Bear” of Build-A-Bear Workshop, Inc. since the company's inception in 1997 and has served as chairman of the board of directors since conversion to a corporation in April 2000. Previously, she was the President of Payless ShoeSource, Inc. and prior to joining Payless, she spent over 19 years in various divisions of the May Department Stores Company in areas including marketing, product development, and merchandise development, planning, and research.

Widely recognised as one of this generation's leading and most creative entrepreneurs, her first book is The Bear Necessities of Business: Building a Company with Heart. In it, Maxine Clark reveals how she built Build-A-Bear Workshop, Inc. from the ground up, offering the tools needed to start, run, and market a company in today's competitive environment.

As one of the true innovators in the retail industry, Maxine has been renowned in her 30-year career for her rare ability to spot emerging retail and merchandising trends, as well as for her insight into the desires of the American consumer. By 2006, there were over 300 Build-A-Bear Workshop stores worldwide, including company-owned stores in the US, Canada, and the United Kingdom and franchised stores in Europe, Asia, and Australia - a testament to her keen business acumen. In 2012 there were over 400 stores worldwide.

Accolades for Maxine Clark and Build-A-Bear Workshop include: induction into the Junior Achievement National Business Hall of Fame; the 2006 Luminary Award for Entrepreneurial Achievement from the Committee of 200; a 2005 Customer First Award from Fast Company, which named her a “Customer-Centered Leader”; a 2005 “Portfolio Company of the Year” award for Build-A-Bear from Small Business Investment Companies; a “Wonder Woman of Toys” nod by Playthings magazine and Women in Toys; an iParenting Media “HOT Award” win; a “Hottest Retailers of 2004″ mention by the International Council of Shopping Centers; and the “Retail Innovator of the Year of 2001″ award by the National Retail Federation. Maxine was also a national finalist in retail for the Ernst & Young Entrepreneur of the Year Award 2004.

As a member of the Board of Directors of The J.C. Penney Company, Inc., Maxine Clark also serves as Chairman of the Corporate Governance Committee. She is also a member of the Board of Trustees of the International Council of Shopping Centers, Barnes Jewish Hospital, Washington University in St. Louis, and her alma mater, the University of Georgia.

She serves as Chair of Teach for America St. Louis and is a member of the Committee of 200, a leading organisation for women entrepreneurs around the world.

Maxine Clark delivers a range of talks including:

The Bear Necessities of Business - Building a Company with Heart: This talk focuses on the story of the creation of Build-A-Bear Workshop from when the first store opened in 1997 in St. Louis to over 400 stores today. The first truly entertainment experience retail brand created for mall-based retail has taken the icon of the teddy bear and turned it into a best friend for generations to come.

Maxine also talks about leading through change and transformation as well as customer-centered leadership.

How to book Maxine Clark for your event