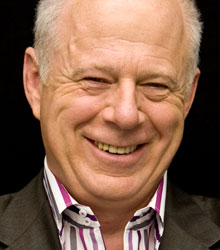 Matthew Fort has made a name for himself as one of the most respected and well liked food writers in the UK. He became the food and drink editor at The Guardian back in 1989 and is a post he still holds today. Matthew is also known as the friendlier face of the somewhat stern judging panel on The Great British Menu. An award-winning food writer, he has also written for the Telegraph and the FT, and has described his food-related travels around Italy.

Matthew worked for over a decade at The Guardian, having previously spent several years as a copywriter and creative in the advertising world. A chance invitation to write a food column for the FT led to a wide variety of writing and he has been a regular contributor to Esquire, the Daily Telegraph, Illustrated London News and Waitrose Food Illustrated.

The winner of the Glenfiddich Food Writer and Restaurant Writer of the Year Awards, Matthew has also written a number of food-related books. Passionate about Italy and its cuisine, he is the author of foodie travelogues Sweet Honey, Bitter Lemons: Travels in Sicily on a Vespa and Eating Up Italy: Voyages on a Vespa. He co-authored Rhubarb and Black Pudding and Cooking by Numbers: From eating alone to the more the merrier.

He has also contributed to other writers' work, including Nigel Slater's book and television series Real Food and Rick Stein's television series Food Heroes. He was also a co-presenter of Market Kitchen on UKTV Food.

He is currently working on a book about Italians and their food, based on a prolonged trip by scooter from the tip of southern Italy to Turin. He lives in Stroud with his wife.

An avid traveller and foodie, Matthew Fort gives talks about his many adventures across the globe in the search of the best local dishes on offer, the art of travel and generally about all the good things in life.

Matthew can also talk about his recent adventures to Sicily, a return trip 30 years on from when he first went. Matthew’s journey involved riding his scooter around and sampling the best the country had to offer from almond ice cream, enchanting vistas and fishing for anchovies beneath the stars.

Clients often ask about purchasing books for giveaways and delegate packs. Below you’ll find a selection of products by Matthew Fort. Click the images to view on Amazon's website. For bulk orders, please speak with your Booking Agent.

How to book Matthew Fort for your event