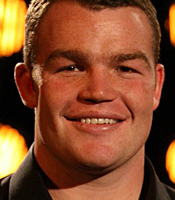 Matt is a rugby union player, who previously played prop for Bath and England.

South African born, Matt joined Bath in 2002 and quickly displayed explosive qualities which earned him a place in the England squad in 2003. 2006 has seen Matt's profile rocket, with his appearance on 'X Factor, Battle of the Stars' coming second to Lucy Benjamin, in front of 7 million viewers.

Matt first caught the eye of the England selectors in 2003, when playing for England in the IRB Under 21 World Cup. He was fast-tracked through the England set up and won his first two caps against the All Blacks on the summer tour to New Zealand and Australia. He was in demand during Bath's successful 2003/04 drive to the top of the Zurich Premiership table.

In March 2004 he was selected as a replacement against Ireland at Twickenham ahead of Jason Leonard. Stevens came into the England team in the 2005 Six Nations, and was one of the standout performers in England's disappointing campaign. Also selected for the 2005 British Lions tour, featuring in six games and was part of this season's Six Nations team.

Coming from a musical family, Matt won the choir Olympics in Vienna with his school. He is also a staunch supporter of the Nelson Mandela Children's Fund, raising over £100,000 through telephone votes on 'X Factor'.

His June 2006 X Factor appearance, mentored by Sharon Osborne earned him a legion of fans and Matt is heavily in-demand for interviews and personal appearances. His charismatic, and out going character make him a favourite with audiences.

How to book Matt Stevens for your event