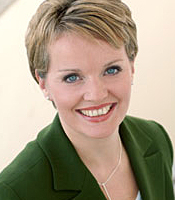 Mary has been a journalist with the BBC for over 20 years. After graduating in Birmingham, she started her career at BBC Hereford and Worcester, the county where she grew up.

Mary worked as a reporter in local radio for 4 years before moving to London to join Five Live. A love of sport led her to present and report for national BBC radio and television for over ten years, covering events including Olympics, Cricket World Cup and Wimbledon.

One of the first faces on BBC News 24 at its launch, Mary quickly moved on to present on BBC Breakfast, One, Six and Ten o’clock News. She also presented sport on Radio 4’s flagship Today programme. Alongside sport, Mary was a presenter on BBC 1’s live Sunday morning magazine programme Heaven and Earth.

After moving back to the Midlands, Mary returned to her news roots to present current affairs programme Inside Out alongside BBC Midlands Today.

Mary is a keen cyclist and season ticket holder at West Brom.
Mary Rhodes is also a popular business presenter for corporate events and conferences.

Mary Rhodes interviewed the author Wilbur Smith as part of our 'Discovering People' series at the Royal Geographical Society (with IBG). Mary was the consummate professional on the night and a pleasure to work with. She had clearly taken care in carrying out a lot of research in advance of the event and she conducted the interview with Wilbur Smith expertly.

The launch day video that Mary Rhodes produced for us has been instrumental in showcasing Serco's delivery of a new and complex project, Barclays Cycle Hire. Mary project managed the video for us and has been great fun to work with - leaving us with the best recorded memory of one of London's most iconic projects.

How to book Mary Rhodes for your event