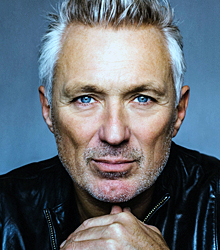 Martin’s career set off In 1979, when he formed the new romantic band Spandau Ballet playing bass guitar. The group went on to tour the world and had a number of Top 20 hits in the 80’s. The single ‘True’ made the American Top 10.

By the late 80’s Martin had married Shirlie, one of the backing singers from Wham, and had started a family. He was then asked to star alongside his brother Gary in the film ‘The Krays’ which was a huge success. He then moved to Hollywood where he made several films! In 1998 he was offered the role of Steve Owen in the BBC’s Bafta Award winning drama series EastEnders. During that time Martin won numerous awards including Best Male Actor at the National TV Awards.

His book ‘True – An Autobiography of Martin Kemp’ was published in 2000 and spent several months in the Sunday Times best sellers list. In October 2020, Martin and Shirlie released their joint biography ‘A True Love Story’.

In the summer 2016 he covered Graham Norton on BBC Radio 2 Saturday morning Show along side Fearne Cotton, and fronted two shows for Discovery / Quest in 2016 - Murder Files & Detective. 2018 saw him perform as Billy Flynnin the West End performance Chicago.

Martin has toured all over the UK 2016 with his popular ‘Audience With’. And now tours the country with his ‘Back to the 80’s’ DJ sets!

Martin appeared as a Judge on BBC’s entertainment show ‘Let it Shine’ and was a contestant on Celebrity’s The Island. He and Shirlie together, were part of a travel documentary, ‘The Road to Saigon’ and in 2019 released their first joint album ‘In The Swing of It’. More recently Martin and son Roman were part of the cast for Celebrity Gogglebox and host their morning ITV show ‘Sunday Best’, Sunday mornings at 8.30am

Clients often ask about purchasing books for giveaways and delegate packs. Below you’ll find a selection of products by Martin Kemp. Click the images to view on Amazon's website. For bulk orders, please speak with your Booking Agent.

How to book Martin Kemp for your event