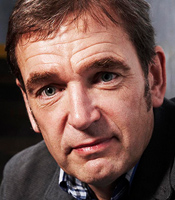 Dr Mark Evans is a man of many talents. He has to be the UK's most hard-to-pigeonhole TV presenter. The former RSPCA chief vet is a well-known animal expert and natural history front man, here and in the US. But, surprisingly, he is also a DIY don and one of the world's best-loved mechanics. Mark has starred in a string of ‘how-to', ‘make, do and mend' formats and over 100 hit engineering shows that have followed his adventures building various forms of transport including a race car, super-trike, pumped-up V8 4x4 and even his own helicopter!

As a science explorer, Mark has travelled the world to track down and test ‘Yeti'” DNA; tried to sequence Hitler's genome; dissected a polar bear on the Arctic sea ice; electro-ejaculated a wild bull elephant to collect a semen sample; and is probably the first person to have climbed into a orangutan nest….200 feet off the jungle floor. Not surprisingly, he's been in some scrapes. Last year, working with scientists in Namibia, he accidentally went head to head with a Nile crocodile and ended up in a trauma hospital in Johannesburg. He was back on location two days later to finish the job. The crocodile was fine.

The host of numerous, innovative live broadcasts and the ground-breaking, BAFTA-winning Inside Nature's Giants, it seems Mark was made for TV. Yet, remarkably, he ended up on our screens by accident.

Inadvertently, Evans began his TV career back in the early days of breakfast telly through complaining about a feature celebrating animal obesity screened by TVam. Only three years out of vet school, he was already a respected vet and a passionate animal welfare advocate. The producers sat up, took notice and invited him on permanently – as their resident pet expert.

In 2015, Mark treked to one of the wildest, most dangerous places on Earth hoping to break some big news in the world of biology; and, back home, appeared in a third series of Dogs: Their Secret Lives, where he treated more head-troubled hounds and revealed the stunning science that helps explain the extraordinary relationships we enjoy with man's best friend.

How to book Mark Evans for your event