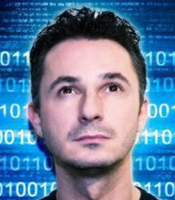 For years, Marco Tempest's masterful blend of digital media and magic has enabled audiences to glimpse the future before technology gets there. At age 22, Marco captured the prestigious New York World Cup of Magic, launching him into international prominence.  Marco Tempest has been featured in his own theatrical shows and as part of numerous television specials which have enjoyed well in excess of 500 million cumulative viewings across the world. Marco's award winning television series “The Virtual Magician” is currently airing in over forty-eight countries.

Marco Tempest's talent has been recognised with a number of prestigious international awards. Marco's internet videos have been featured on Jay Leno's Tonight show, dozens of NBC & MSNBC stations across the world. In addition, the United Nations commissioned Marco to create a special viral video to promote its Millennium Campaign against poverty.

Marco has been invited as a visionary presenter to the “Seoul Digital Forum” and the TEDxTokyo conference and presented his keynote to the xDays Leadership conference in Switzerland.

How to book Marco Tempest for your event