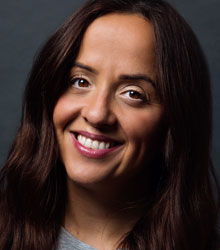 Bafta Breakthrough Stand up comedian, obsessed with buying all the make up despite having none of the application skills. She does however have a beautiful talent for turning stand up shows into empowering, exciting, call-to-arm, rallying afterparties.

Of Polish Descent. Her debut stand up show, What Would Beyoncé Do?! regarded as one of the biggest hits of the decade (the Guardian) a genre defining debut.

Luisa’s 2014 follow-up Am I Right Ladies?! was met with equal critical acclaim. The opening thigh gap joke notching up more than 50 million views.

Her third show Politics For Bitches was created to shine a light on inequality, healthcare, cancer and cannabis. Since turned into a four part BBC documentary.

Luisa Omielan became the first comic to be recognised with a Bafta Breakthrough Brit accolade for stand up.

Luisa can be found gigging most weekends in London.

She trained in Performing Arts At Salford as well as taking some Improv & Clowning classes at Chicago's Second City.

She has hosted many award ceremonies and worked with Lush, Benefit Cosmetics, Arcadia Group, IT Awards, Comic Relief, Women in Finance and Bafta.

Luisa loves to make award shows a lot of fun, by making things inclusive, vibrant and personal. She understands some people can feel so nervous and overwhelmed, it's her job to make everyone feel like rockstars.

How to book Luisa Omielan for your event