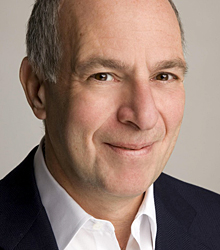 Loyd Grossman is one of the ‘original' celebrity chefs and arguably a driving force behind today's popularity with celebrity cookery programmes. However, his knowledge of and fascination with food led him to create his own extensive range of cooking sauces produced by Premier Foods which has sold more than a billion units.

With a television career that spans more than 30 years, for 10 of those Loyd presented the original BBC MasterChef series between 1990-2000. Other TV credits include the popular Through The Keyhole (1987-2003) which he created and co-presented with Sir David Frost, Behind The Headlines and The World on a Plate. In 2013, more than a decade after he presented MasterChef, Loyd Grossman returned to cookery presenting as a judge on ITV's Food Glorious Food.

Quality fresh food has always been a part of Loyd Grossman's life as he grew up in a small fishing town near Boston, Massachusetts. He came to England in 1975 to study at the London School of Economics (where he received a Masters in economic history), following graduation at Boston University with a BA in history. Loyd became a journalist working as a restaurant critic as well as covering other topics, for publications such as The Sunday Times and Harpers & Queen. While he was earning his reputation as a credible food writer, Loyd admits that he hadn't even learnt to cook himself.

In 2000, he was appointed to head the £40 million project to improve the quality of food served in British NHS hospitals, and in 2003 he received an OBE for services to patient care - specifically in the area of hospital catering.

His lifelong interest in history, the arts and heritage has seen him become involved with a number of organisations. Loyd was a member of the Court of Governors of the London School of Economics (1996-2009) and is now an Emeritus Governor of the LSE, Chairman of The Heritage Alliance, Chairman of the Churches Conservation Trust and Chairman of the Campaign for Museums. He also founded the 24 Hour Museum (now Culture 24) and was its Chairman until 2005. He is a Member of the Council of the British School at Rome. In June 2015 he was appointed CBE in recognition of his services to heritage.

Clients often ask about purchasing books for giveaways and delegate packs. Below you’ll find a selection of products by Loyd Grossman CBE. Click the images to view on Amazon's website. For bulk orders, please speak with your Booking Agent.

How to book Loyd Grossman CBE for your event