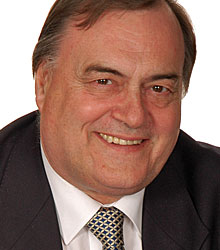 Copyright © Office of The DPM
Sections:

Arguably Prescott's most significant achievement was to lead negotiations at Kyoto, resulting in the first international treaty on climate change. He is also recognised for his keen interest in regeneration, particularly in the housing sector. Having now left political office, Lord Prescott continues to advise the Chinese on their plans to build a thousand new 'sustainable' cities.

Starting out as a Cunard ship's steward and union official, Prescott rose to power via a degree in economics and a spell in the European Parliament. Throughout the period of modernisation, he maintained his core beliefs and his popularity with the party's grassroots.

John Prescott has considerable insight into the leadership role. As well as his work with former US Vice President Al Gore on the international stage, he is widely credited for the way he managed the sometimes strained relationships around the Cabinet table.

Speaking Topics include:
• Policy Making
• Housing
• Regeneration and The Environment
• The Leadership Team Behind The Scenes of Government

Clients often ask about purchasing books for giveaways and delegate packs. Below you’ll find a selection of products by Rt Hon Lord John Prescott. Click the images to view on Amazon's website. For bulk orders, please speak with your Booking Agent.

How to book Rt Hon Lord John Prescott for your event