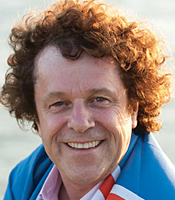 Leo Sayer's chart-topping music career has spanned an impressive 4 decades. Since beginning his singing career in the early 70's, Sayer has continuously appeared in the singles and album charts both in the UK and the US.

His worldwide success came into fruition due to album hits such as Silverbird (1973), which went to #2 on the UK album charts, Endless Flight and When I Need You, as well as singles such as One Man Band, Long Tall Glasses and You Make Me Feel Like Dancing, which became Leo's first US number 1, also winning him a coveted Grammy Award for best R & B song in 1977.

Leo has played many live shows throughout his career- He's co-headlined with Bill Cosby at the Las Vegas Hilton, headlined in New York at Central Park to an audience of 60,000 people, and this year performed at the Australia Day national TV concert on a floating stage in front of a record crowd at Sydney's Darling Harbour.

Leo's also had a remarkable resurgence as a hit record artist in recent years, first charting in 1998 with the dance remake of The Groove Generation's You Make Me Feel Like Dancing, then in 2005 with Thunder In My Heart Again by DJ Meck, which brought Leo a welcome return to number one in the UK single chart. Leo Sayer: At His Very Best, a career spanning compilation album, was released in the UK on 6 March 2006. It exclusively features the Meck single, alongside Sayer classics such as, When I Need You and You Make Me Feel Like Dancing.

In 2008, Sayer released a new album in Australia, Don't Wait Until Tomorrow, which features selections from his catalogue in an entirely new setting, rearranged with strings and acoustic and jazz instrumentation. Since then Leo's popularity world wide has hardly diminished, and stimulated by a move of home to Sydney Australia, it definitely looks like, for Leo, the show will go on and on, for many more years to come...

How to book Leo Sayer for your event