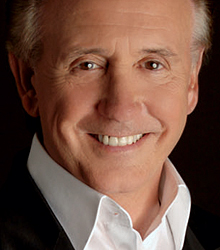 'Is This The Way To Amarillo', written by Neil Sedaka and Howard Greenfield, was a hit in almost every country in the world, achieving sales in excess of 4 million records and topping the Spanish charts for almost 6 months.

Further hits followed with 'Avenues and Alleyways' from the TV series The Protectors and more recently the film Love, Honour and Obey. Collaboration with songwriter Geoff Stevens brought another chart hit with the song Drive Safely Darling.

Tony Christie was born Anthony Fitzgerald on Easter Sunday, April 25th 1943 in Conisbrough, South Yorkshire. At the age of 17 he began working as part of a due called the Grant Brothers performing Everley Brothers and Roy Orbison songs. He then fronted numerous bands releasing his first single with the Trackers called 'Life's Too Good To Waste' in 1966.

However, it was the use of 'Is This The Way To Amarillo' in Peter Kay's 'Phoenix Nights' which brought Tony to a new audience of young fans and brought him cult status. Tony was also asked to record the theme tune to Peter's new spin-off series 'Max & Paddy', aired in November 2004.

A huge 30-date tour of the UK started in March 2005, following the release of a TV-advertised 'Definitive Collection' album. This included 4 brand new, previously unreleased songs, as well as 17 of Tony's hits and favourite album recordings. Is This The Way To Amarillo, re-released in 2005 became the top selling single of 2005 and was nominated as a Brit Award Best Single.

Tony Christie is an entertainer in every sense of the word and remains in huge demand for personal appearances and as a headlining musician at corporate and private events.

He can perform anything from a 30 minute set to backing tracks or up to an-and-a-half with his full live band.

Clients often ask about purchasing books for giveaways and delegate packs. Below you’ll find a selection of products by Tony Christie. Click the images to view on Amazon's website. For bulk orders, please speak with your Booking Agent.

How to book Tony Christie for your event