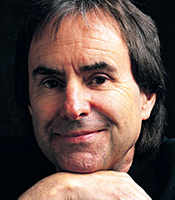 By the late 80s, it had taken Chris DeBurgh more than a decade to become the 'overnight success' so many mistakenly believed him to be.

To those unfamiliar with his steady, determined rise to the top, he appeared to have arrived suddenly - out of nowhere - clutching major, world-wide hits with The Lady In Red and its accompanying album, Into The Light. The reality is not so fanciful. In a music industry which so often reacts to fashionable flavour and superficial appeal, Chris remains unique; he is an island of inspiration nestling amid an ocean of popularity.

He is proof positive that while trends come and go on freak tides, true talent will weather the passing storms to eventually win through. Born in Argentina on October 15, 1948, Chris is the son of British parents. His childhood was rich in travel and experience; his father's career moved the family to Malta, Nigeria, Zaire and finally to Ireland. It was on the Emerald Isle - where Chris still lives, with his wife Diane and their three young children, Rosanna, Hubie, and Michael - that he found his musical feet.

In the grand setting of the 12th Century castle which his parents converted into a hotel, he learned to play the guitar - and he had performed literally hundreds of concerts there to audiences of enthralled guests before even seriously considering a career as a musician. Instead, he studied at Trinity College, Dublin, and gained a degree in French and English. On graduating, and realising that he had to get a job, Chris began singing to earn a living.

His early stage platforms included a hamburger restaurant and a hair dresser's shop, before he finally ended up singing with a band in a small concert hall. Encouraged by the possibilities, he headed for London in search of a recording contract and, after two years of dead-ends, secured a publishing deal which eventually led him to sign with A&M Records in 1974.

The following year, Chris released his debut album - Far Beyond These Castle Walls and Turning Around, a single taken from it, became his first hit. Later re-titled Flying, it sold nearly 500,000 copies in Brazil and stayed number one there for more than 30 weeks. His next LP, Spanish Trains and Other Stories, then captured the imagination of Canada, resulting in Chris' first platinum disc. Since then, from Scandinavia to Australia, from the United States to the United Kingdom, his reputation has firmly built and lengthened its reach through the successive studio albums At The End Of A Perfect Day, Crusader, Eastern Wind, The Getaway, Man On The Line, Into The Light, Flying Colours, Power Of Ten, This Way Up, Beautiful Dreams, and a classic collection of old & new songs, The Love Songs.

In October of 1999 Chris produced another studio album, this time returning to the Band format that was much loved from Into The Light. Entitled Quiet Revolution it contains 15 all new songs and was well received at launch.

Now acknowledged as a singer-songwriter of international renown, Chris has never lost sight of what has made it all possible; his own self-belief - and the devoted support and dedication it has earned him as a reward.

How to book Chris de Burgh for your event