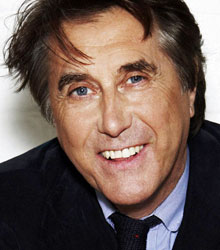 Bryan Ferry emerged as if from nowhere in 1972 when he launched Roxy Music on an unsuspecting but highly receptive world. The band was the ideal vehicle for his multifarious talents as composer, singer and visual artist - the wildly innovative music was presented via equally original artwork, costumes and stage shows.

His voice has been described as an "elegant, seductive croon" and he established a very distinctive image and sartorial style. Along with his contemporary David Bowie, they influenced an entire generation with both their music and their appearances.

Roxy Music crystallised the hippest style of the '70's, sophistication crossed with street-credibility. A series of groundbreaking albums such as For Your Pleasure and Siren and hit singles like Love Is The Drug and Jealous Guy brought the group worldwide success, culminating in the album Avalon in 1981.

Ferry, starting with These Foolish Things in 1973, has meanwhile proved himself a masterful interpreter of other composers' songs with a series of solo albums. Since Roxy Music broke up in 1982 he has blended the two strands of his career into one, variously recording pop classics and his own material on the albums Boys and Girls, Bete Noire, Taxi and Mamouna. In 2019, Bryan Ferry was inducted into the Rock and Roll Hall of Fame as a member of Roxy Music.

His album of songs from the 1930's, entitled 'As Time Goes By', was released to commercial and critical success in 1999 and was nominated for a Grammy award.

Following his solo release 'Frantic' in 2002 Bryan toured again with a reformed Roxy Music, however, in 2011 they performed together for the last time, to-date, when Roxy Music embarked on a world tour to celebrate the group's 40th anniversary.

In 2006, he signed a contract with high street retailer Marks & Spencer to model its "Autograph" men's clothing range.

In June 2011, Bryan was honoured with a CBE in HM The Queen's Birthday Honours for his contribution to the British music industry, then in 2012 he was awarded the French national honour of Officier de l’ordre des Arts et des Lettres.

Bryan Ferry has performed twice at Glastonbury Festival in 2014 and 2015, then in 2017, he made his debut performance at the Hollywood Bowl, backed by the venue's full orchestra.

Bryan Ferry continues with his own successful UK and International tours, appearances and is available for select private and corporate bookings.

The party was such a success. Bryan Ferry was just excellent and his patience with the guests after he came off-stage was admirable and most kind of him.

Clients often ask about purchasing books for giveaways and delegate packs. Below you’ll find a selection of products by Bryan Ferry CBE. Click the images to view on Amazon's website. For bulk orders, please speak with your Booking Agent.

How to book Bryan Ferry CBE for your event