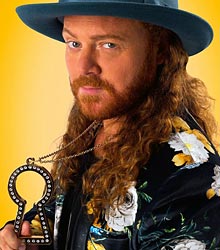 Leigh has many accolades but started his career when he was nominated as Best Newcomer at The British Comedy Awards in 2002 for his work on C4's Friday night show Bo' Selecta!, fronted by celeb super-fan Avid Merrion. It was from this series that many of his now infamous characters (and their associated catchphrases) were born such as Mel B, Craig David and Kes and of course Michael Jackson. Another two series' of the hilarious sketch show followed and one of his characters The Bear even got his own spin-off show, A Bear's Tail! At the end of 2005, Avid moved to Los Angeles with his wife (and sister) Sacha to open up a hotel, which was packed to the rafters with Hollywood A Listers in Avid Merrion's XXXmas Special. Avid and Sacha later returned to their star-studded Hollywood hotel for a new series, Bo in the USA.

2009 saw the death of Leigh's hero, Pop legend Michael Jackson, and so Leigh did a tribute to him in the only way he knew how, by donning the infamous Bo' Selecta! rubber masks one last time and creating a one off unique program Cha'mone Mo' Fo' Selecta! Featuring highlights of MJ's life for E4 and on DVD.
Leigh first introduced us to Keith Lemon “Businessman of the Year 93” In 2007 when Keith fronted a brand new comedy travel series, Keith Lemon's Very Brilliant World Tour, his first ever show for ITV2. The series followed Keith as he took some time out to travel the world with the aim to “fatten his horizons and texturise his conversations”.

Leigh's comedy creation, Keith Lemon, made his first venture in to prime time ITV1 when he hosted Sing If You Can during Spring 2011 – the debut episode was the highest rated original programme for the channel in over 3 years.
In November 2011 Leigh fulfilled a lifetime ambition when the cameras started rolling on Keith Lemon: The Film – a film that not only he stars in, but that he also co-wrote and was released in cinemas in August 2012.

Clients often ask about purchasing books for giveaways and delegate packs. Below you’ll find a selection of products by Keith Lemon (Leigh Francis). Click the images to view on Amazon's website. For bulk orders, please speak with your Booking Agent.

How to book Keith Lemon (Leigh Francis) for your event