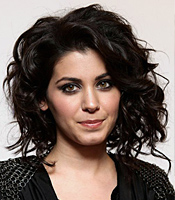 Since the UK release of her debut album 'Call Off The Search' in the autumn of 2003, Katie Melua has gone from being an unknown musician signed to a small independent label to being the most successful artist in Britain this year with the album selling more than 1.3 million copies.

On the album, her distinctive, pitch perfect voice weaves its way seemingly effortlessly through a range of blues, folk and jazz that is striking a chord internationally - the story continues overseas with top 10 album chart positions throughout Europe and Australasia and acclaim throughout America. In Spring 2004 Katie headlined her first UK tour and, after her live USA tour and performances at festivals throughout Europe, returned to Britain for her second UK tour in October 2004.

Katie Melua was born in Georgia (former USSR) in 1984 growing up in the capital Tbilici and later the seaside town of Batumi. The family left Georgia when Katie was 8 and moved to Belfast due to her father's profession as a heart surgeon.

Katie didn't always want to be a singer or songwriter. Her ambition when she was thirteen was to be a politician or a historian "I honestly thought I'd be able to bring peace to the world.... If I ruled it!" The family lived in Belfast for five years before moving to South East London. When Katie was fifteen she entered a TV talent competition called Stars Up Their Nose - singing Mariah Carey's "Without You". Despite just entering for fun, she won the competition (the prize was a bedroom makeover and an arm chair for her dad) and also gained valuable experience by performing live on ITV three times.

Her sensational voice caught the attention of Terry Wogan who, as he did with Eva Cassidy, chose to pioneer Katie, playing the single 'The Closest Thing To Crazy' throughout the summer of 2003. Michael Parkinson had also picked up the mantle giving her frequent air-time on his show. The release of the single saw Katie achieving her first hit single entering the charts at number 10.

How to book Katie Melua for your event