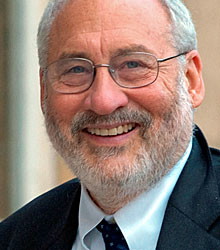 Recipient of the 2001 Nobel Prize in Economics and former Chief Economist of The World Bank, Joseph Stiglitz is a pioneer in the field of the application of economic theories, having helped create the new branch of economics 'The Economics of Information'.

In 2000, he founded the Initiative for Policy Dialogue, a think tank on international development based at Columbia University. He has been a member of the Columbia faculty since 2001 and received that university's highest academic rank (university professor) in 2003.

In 2011, Joseph Stiglitz was named by Time magazine as one of the 100 most influential people in the world. Known for his pioneering work on asymmetric information, Stiglitz's work focuses on income distribution, risk, corporate governance, public policy, macroeconomics and globalisation.

Born in Indiana, USA in 1943, Joseph is the son of an insurance salesman and a schoolteacher. During his growing up years, intense political debate was part of family life, which might have given rise to his interest in politics and was further nurtured during his college days.

A graduate of Amherst College he received his PHD from MIT in 1967, becoming a full professor at Yale in 1970, and in 1979 was awarded the John Bates Clark Award, given biennially by the American Economic Association to the economist under 40 who has made the most significant contribution to the field.

He has taught at Princeton, Stanford, MIT and was the Drummond Professor and a fellow of All Souls College, Oxford. He is now University Professor at Columbia University in New York.

Professor Joseph Stiglitz was a member of the Council of Economic Advisers from 1993-95, during the Clinton administration, and served as CEA chairman from 1995-97. He then became Chief Economist and Senior Vice-President of the World Bank from 1997-2000.

In 2001, he was awarded the Nobel Prize in economics for his analyses of markets with asymmetric information, and he was a lead author of the 1995 Report of the Intergovernmental Panel on Climate Change, which shared the 2007 Nobel Peace Prize.

In 2008 he was asked by the French President Nicolas Sarkozy to chair the Commission on the Measurement of Economic Performance and Social Progress, which released its final report in September 2009 (published as Mismeasuring Our Lives). He now chairs a High Level Expert Group at the OECD attempting to advance further these ideas.

In 2009 he was appointed by the President of the United Nations General Assembly as chair of the Commission of Experts on Reform of the International Financial and Monetary System, which also released its report in September 2009 (published as The Stiglitz Report). Since the crisis, he has played an important role in the creation of the Institute for New Economic Thinking (INET), which seeks to reform the discipline so it is better equipped to find solutions for the great challenges of the 21st century.

Stiglitz helped create a new branch of economics, "The Economics of Information'', exploring the consequences of information asymmetries and pioneering such pivotal concepts as adverse selection and moral hazard, which have now become standard tools not only of theorists, but of policy analysts.

His work has helped explain the circumstances in which markets do not work well, and how selective government intervention can improve their performance.

Recognised around the world as a leading economic educator, Stiglitz has written textbooks that have been translated into more than a dozen languages. His book Globalisation and Its Discontents (W.W. Norton, 2001) was translated into 35 languages and sold more than one million copies worldwide.

Professor Joseph Stiglitz has received more than 40 honorary degrees, including from Cambridge and Harvard, and he has been decorated by several governments including Bolivia, Korea, Colombia, Ecuador, and most recently France, where he was made the Officer of the Legion of Honor.

Since pioneering a new branch of economics 'The Economics of Information', Professor Joseph Stiglitz has continued to offer tools for policy analysts. In his highly sought-after keynote speeches, he explores how markets are influenced and the effects of various circumstances on their success; concluding with views on how performance can be improved.

His specialist topics include:
• The Economics of Information
• Government Intervention
• The Credit Crunch and the Global Downturn
• Inequality
• Global Growth
• Economic Policy

Making Globalisation Work
Based on his book by the same name, Joseph Stiglitz explores why globalisation is failing so many people and what must be done create stable economies. This presentation specifically demonstrates the intersection between these key components: trade relationships, the gap between rich and poor, China/America, global warming and pollution, developing & emerging economies, and international governance/regulatory bodies.

The Fall: A Chronicle of the Financial Crisis
The current financial crisis didn’t start with the housing bubble—it started with policies enacted by previous Presidents, starting with Ronald Reagan all the way through to President George W. Bush. Stiglitz explores how free market financial policy and government regulation, or lack thereof, led to the 2007 financial crisis. This fast-paced presentation includes an overview of the current state of the economy and also what businesses and financial institutions can expect during economic recovery.

I Dissent: Unconventional Economic Wisdom
Joseph Stiglitz’ commentary on current economic policy and global financial news is controversial, provocative, and informative. It is also refreshingly direct. He provides audiences with solid context that can be used to add further dimensions to their work while gaining greater insight into the latest headlines.

A selection of recent presentations are:
• The Role of the International Monetary Fund in a Changing Global Landscape.
• The Future of Fiscal Policy Post-COVID
• Journalism is a public good
• Climate Change, the Social Cost of Carbon and Risk
• "Building back better" - but on what foundations?
• 20th Anniversary Conference of the Center on Capitalism and Society
• The Role of Central Banks in a 21st Century Economy
• Joseph Stiglitz: Rewriting the Rules of the European Economy
• Ministerial Roundtable, UN Conference on Trade and Development
• IMF surcharges: A necessary tool or counterproductive obstacle to a just and green recovery?
• Joseph Stiglitz Meets the EOF Community

Clients often ask about purchasing books for giveaways and delegate packs. Below you’ll find a selection of products by Professor Joseph Stiglitz. Click the images to view on Amazon's website. For bulk orders, please speak with your Booking Agent.

How to book Professor Joseph Stiglitz for your event

To book Professor Joseph Stiglitz, please submit an online enquiry, email bookings@nmp.co.uk or speak with one of our booking agents on +44 (0)1372 361 004.