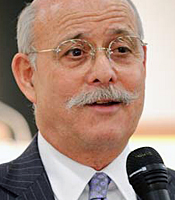 Jeremy Rifkin is the bestselling author of twenty books on the impact of scientific and technological changes on the economy, the workforce, society, and the environment. His books have been translated into more than thirty five languages and are used in hundreds of universities, corporations and government agencies around the world.

In 2011, his New York Times bestseller The Third Industrial Revolution, captured the attention of the world. Mr. Rifkin's vision of a sustainable, post carbon economic era has been endorsed by the European Union and the United Nations and embraced by world leaders including Chancellor Angela Merkel of Germany, former President François Hollande of France, and Premier Li Keqiang of China.

Jeremy Rifkin has been an advisor to the European Union for more than a decade. He also served as an adviser to President Nicolas Sarkozy of France, Chancellor Angela Merkel of Germany, Prime Minister Jose Socrates of Portugal, Prime Minister Jose Luis Rodriguez Zapatero of Spain, and Prime Minister Janez Janša of Slovenia, during their respective European Council Presidencies, on issues related to the economy, climate change, and energy security. He currently advises the European Commission, the European Parliament, and several EU and Asian heads of state.

Jeremy Rifkin is the President of the TIR Consulting Group LLC, comprised of many of the leading renewable energy companies, electricity transmission companies, construction companies, architectural firms, IT and electronics companies, and transport and logistics companies. His global economic development team is working with cities, regions, and national governments to develop the Internet of Things (IoT) infrastructure for a Collaborative Commons and a Third Industrial Revolution.

He is a senior lecturer at the Wharton School's Executive Education Program at the University of Pennsylvania where he instructs CEOs and senior management on transitioning their business operations into sustainable Third Industrial Revolution economies. From 1995-2010, Mr. Rifkin taught in the Advanced Management Program at Wharton.

Jeremy Rifkin speaks frequently before government, business, labour and civic forums. He has lectured at hundreds of the world's leading corporations as well as more than 300 universities in some thirty countries in the past four decades.

• The Third Industrial Revolution: Leading the way to a green energy era and a hydrogen economy
• The Global Environmental Crisis:The path to sustainable development
• The European Dream: How Europe's vision of the future is changing the global economy
• The Age of Access: Understanding the historic shift in economic models, from traditional capitalist markets to emerging global commercial networks
• The Future of Work: Rethinking the nature of employment in an increasingly automated, borderless and highly mobile global economy
• The Hi-tech Revolutions of the 21st Century: Harnessing the scientific and technological fields of biotechnology, nanotechnology, advanced IT, and cognitive science in ways that advance the process of globalization
• Rethinking the Global Health Paradigm: Making the shift from managing disease to promoting wellness
• Living in a Three Sector World: Building new partnerships between the global business community, civil society, and governments to create a sustainable approach to globalization
• Deep Globalization: Deepening and expanding the global economy by bringing the remaining 60% of the human race into the 21st century marketplace
• Educating Youth for a Global Era: Introducing service learning and experiential education into schools and colleges to prepare youth for working and living in a diverse, multicultural world
• Immigration in a Globally Connected World: Addressing the challenges of migration in an era of cultural diasporas
• Beyond the Nation State: Examining the future prospects of transnational political spaces in Europe, Asia, the Americas, and Africa

Clients often ask about purchasing books for giveaways and delegate packs. Below you’ll find a selection of products by Jeremy Rifkin. Click the images to view on Amazon's website. For bulk orders, please speak with your Booking Agent.

How to book Jeremy Rifkin for your event