Founder and Editor in Chief, The Big Issue 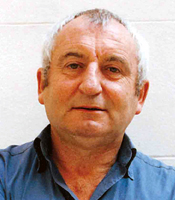 John Bird founded The Big Issue in 1991, and since then he has spread the business all over the world.

He was born into poverty, brought up in care and has lived through a lot. John’s life journey has included spells as a thief, prison inmate, artist and poet. Now an established iconoclast, activist and publisher, he is the force behind The Big Issue, the world's most successful street magazine.

John Bird is an inspirational business leader with an outstanding record of using business as a tool for social change.

Since founding The Big Issue in 1991 with Gordon Roddick, John has overseen its development into the UK's most successful social enterprise, stretching from Tokyo to Totnes and helping thousands of homeless people worldwide.

He was nominated for life peerage by the House of Lords Appointments Commission in October 2015 to become a non-party-political peer. On 30 October, he was created Baron Bird, of Notting Hill in the Royal Borough of Kensington and Chelsea.

John Bird on Leadership
"I have met many successful leaders and count some of them among my friends. I'm told I'm a good leader too. Keeping the Big Issue together through all its trials and torments has certainly been a test of my own leadership skills. The fact that The Big Issue is stronger than ever today is in part testament to my ability to lead from the front.

My life has been about leadership and inspiring others to become leaders - even if it is just to take leadership of their own lives. Creating and motivating new leaders is what I do best.

My leadership style is to be engaging, questioning and above all inspirational, because my own life story and experiences have been inspirational. The people I have known, the experiences I've had, and the places I've been - all still inspire me today.

Bad leaders can ruin whole organisations, and even nations, while great leaders inspire those around them to feel better and do better. Great leaders can turn even an ordinary business or organisation into an exceptional one. Successful leadership breeds success."

At a time when Corporate Social Responsibility is preoccupying business leaders and consumers alike, John Bird offers an authoritative, fresh approach, and some original perspectives on the interaction of business and society.

His diverse experience, combined with his exuberant personality, erudition and often trenchant views make him a compelling and entertaining keynote speaker.

John Bird has spoken at the UN in New York, Nairobi and Istanbul, Downing Street and Buckingham Palace. The UN Scroll of Honour, an MBE and the 2005/6 Beacon Prize for Creative Giving are just three of the many accolades and awards he has received.

An inspirational business leader with an outstanding record of using business as a tool for social change, John Bird is an original and authoritative voice on a range of social and business issues

Very pleased with our event. John Bird 'went the extra mile' for us, stayed chatting to our students, seemed genuinely interested and impressed with them and also did a radio interview for us in the evening. He had indicated that he'd like to stay in touch with us so a great outcome all round.

Clients often ask about purchasing books for giveaways and delegate packs. Below you’ll find a selection of products by Lord John Bird MBE. Click the images to view on Amazon's website. For bulk orders, please speak with your Booking Agent.

How to book Lord John Bird MBE for your event