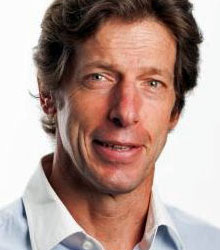 Founder of two start-ups, a seasoned corporate businessman and former SAS officer, Joff Sharpe is one of the few people who can genuinely claim to be as comfortable in the jungle as he is in the boardroom.

With a resume that includes a year living amongst the Iban headhunters of Borneo, a stint as an SAS officer, running an Internet company for Rupert Murdoch and being Piers Morgan's HR Director, Joff is uniquely placed to help businesses deal with tough situations.

He has been Chairman, CEO, COO and CHRO of a range of international businesses and this enables him to talk with authority about how Special Forces wisdom applies to business life in a practical way.

Following a successful ten-year career in the British Army, five of them as an officer in the SAS, Joff Sharpe shifted his focus to the corporate world and spent over twenty years as a human resources professional working for a plethora of Blue Chip companies including Mars, PepsiCo, News International and Vodafone.

Fundamentally, Joff’s roles within these organisations was always to strengthen the talent base, culture, organisation and effectiveness of the businesses.

From there, he moved into private equity where Joff’s responsibilities took him from the Ruhr Valley to Sub-Saharan Africa and to Scandinavia. In 2013, he joined £17 Billion real estate investment trust, British Land plc, as Human Resources Director, and was subsequently promoted to Chief Operations Officer until his departure in 2020.

His first published book, Who Dares Wins in Business (2014), helps business audiences apply the principles, attitudes and habits which underpin the success of the SAS to their organisations, teams and daily lives.

He has subsequently elaborated on these themes for various publications including Newsweek, Huffington Post and Hong Kong's South China Morning Post.

Joff Sharpe is a thoughtful speaker who defies the stereotype of the macho special forces soldier; he argues that success on the battlefield, like in the boardroom, requires careful preparation, humility and adaptability – not muscle.

Over the last 30 years Joff Sharpe has helped a wide range of international companies and organisations improve their performance, mainly in the telecommunications, media and technology sectors.

Utilising his vast wealth of experience to identify principles employed by the SAS that can lead any company to peak performance.

Joff’s motivational keynote speech is a synthesis of the 10 factors that have underpinned SAS success throughout its 75+ year history and shows, in a very practical way, how these can be applied to help leaders and businesses be more successful.

The skills of the SAS are legendary because they are expected to beat overwhelming odds again and again. Attributes such as speed, purpose, surprise and simplicity are second nature to these top notch recruits and thanks to them the unique Special Forces unit has repeatedly succeeded in extremely challenging tasks, often against vastly superior forces. They are frequently asked to achieve the impossible and most of the time they do just that.

However, are the principles which form the foundation of this elite unit only applicable in special circumstances? If a team can consistently work at peak performance and effect dramatic feats in the field of combat, then there must be essential and teachable techniques that can be put to use in the corporate sector?

Joff Sharpe argues that the methods of the Special Forces can, and should, be used by businesses to give companies a crucial edge in the vastly competitive corporate world.

Doing business the SAS way isn’t easy, but being the best never is.

The Man is The Regiment
Be courageous; if you don’t dare how can you possibly win?
Lead, Follow or Get out of the Way!

Joff fit the bill perfectly, drawing on his extraordinary range of experiences from jungle to boardroom, from Silicon Valley to newsroom. This was an extraordinary session with incredible learning.

With a 'colourful' background like Joff's I think there were high expectations for his presentation. He certainly delivered. Joff interpreted the brief perfectly and his presentation was fantastic. He engaged instantly with the audience and judging by the questions at the end, I think he left the audience genuinely wanting to know more.

Clear, concise and engaging - Joff grabbed everyone's full attention right from the start and provoked much thought of how to implement his business philosophy based on his impressive service background. A thoroughly decent, humble guy too. His mantra of "Lead, Follow or Get Out Of The Way" will reverberate around our company for years!

Good speaker, professional and pleasant. Content was interesting and enjoyed by the audience.

Clients often ask about purchasing books for giveaways and delegate packs. Below you’ll find a selection of products by Joff Sharpe. Click the images to view on Amazon's website. For bulk orders, please speak with your Booking Agent.

How to book Joff Sharpe for your event