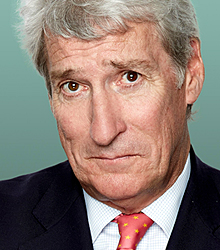 In 1979, Jeremy Paxman became a reporter on Panorama, where his assignments took him around the world. During this time he wrote (with Robert Harris) "A Higher Form Of Killing", an acclaimed history of chemical and biological warfare.

It was while travelling in El Salvador researching for his book about Central America, Through The Volcanoes, that he received a call inviting him to present the Six O'Clock News with Sue Lawley and Nicholas Witchell.

In the summer of 1985, he became the presenter of London Plus, moving to Breakfast News on its relaunch in November 1986. He joined BBC 2's Newsnight on the 1 October 1988, where he reports on the major events of the day as well as presenting special interest foreign reports.

Jeremy Paxman has also presented 'Behind the Headlines' and more recently the BBC series, 'Did You See...?' He currently presents University Challenge on BBC2 and Radio 4's Start The Week.

Clients often ask about purchasing books for giveaways and delegate packs. Below you’ll find a selection of products by Jeremy Paxman. Click the images to view on Amazon's website. For bulk orders, please speak with your Booking Agent.

How to book Jeremy Paxman for your event