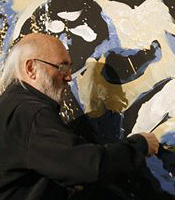 Jean-Pierre Blanchard is one of the world's greatest speed painters and a renown contemporary artist. Reproducing portraits of celebrities like Jimi Hendrix, Marilyn Monroe, Luciano Pavarotti, Salvador Dalí, Michael Jackson and Ray Charles, Jean-Pierre Blanchard became known to the public through regular demonstrations on television shows around Europe, including the UK, Belgium, Switzerland, Germany, Portugal and of course his home in France.

When painting becomes entertainment, Jean-Pierre shares with his audience the emotion of an unrepeatable moment when music and painting merge to become an art form.

Jean-Pierre Blanchard's spectacular performances, on television in addition to numerous prestigious art festivals, have earned him both recognition and an international notoriety. Inspired by exceptional men and women, by the world's great iconic figures, and the imagery of poets and dreamers, he combines this greatness with a seemingly random spot of colour, with the indescribable IT that is everywhere, in nature, in the street, and in the smallest of stones.

In his entertaining, mesmerising and original show, Jean-Pierre creates portraits of celebrities on 3-5 minute routines set to live music or backing tracks. He can also paint a portrait of a specific person if he is given a picture of them at least a month in advance.

His art is also extremely popular for corporate trade shows, exhibitions and promotions where he can integrate the company brand, colours and message within the creation.

How to book Jean-Pierre Blanchard for your event