England's most capped rugby player of all time 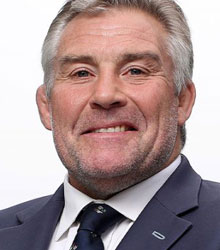 Jason was educated at Warren Comprehensive School, Chadwell Heath Essex and played his early rugby with Barking before joining Saracens with whom he won a Courage League Division Two title in 1989/'90.

After playing with the England Colts he won 'B' caps against Fiji and France 'B' before touring Argentina with the senior squad in 1990 - when he played in both tests and during the 1990/'91 season he left Saracens to join his present club Harlequins. Jason has been a regular in the side ever since and is now England's most capped forward with 97 caps, but he had to stop playing after England clinched their second consecutive Grand Slam against Wales in 1992.

This was because of a ruptured disc in his back which required surgery. In all he was out of the game for three months but he made a full recovery and returned to rugby at the start of the following season without missing a game for England. During the 1996/'97 season he captained the side against Argentina and marked the occasion by scoring his first and to date only international try.

He is now England's most capped player of all time breaking the record, previously set by Rory Underwood, against Argentina in November 2000.

Clients often ask about purchasing books for giveaways and delegate packs. Below you’ll find a selection of products by Jason Leonard. Click the images to view on Amazon's website. For bulk orders, please speak with your Booking Agent.

How to book Jason Leonard for your event