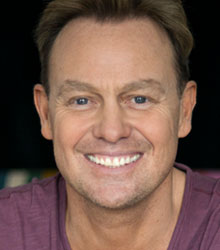 Jason Donovan first made a name for himself as Scott Robinson in the Australian teen soap Neighbours during the mid 1980s, one of the highest-rating shows in the UK.

After a collaboration in 1988 with Kylie Minogue, his Neighbours co-star and soon-to-be international pop star, on the duet 'Especially For You', Jason released his chart-topping debut album, Ten Good Reasons, a year later. It went on to become the UK's biggest selling album in 1989 and spawned an astonishing four No. 1 singles on the UK charts.

Jason’s meteoric pop career was followed in 1991 by a long and successful run in London’s West End playing the lead in Joseph And The Amazing Technicolour Dreamcoat. When he played Joseph, Jason also had a No 1 hit with 'Any Dream Will Do'.

After his portrayal of Joseph, which earned him an Olivier nomination, Jason went on to star in The Rocky Horror Show, Chitty Chitty Bang Bang, Priscilla, Annie Get Your Gun, The Sound of Music, The King’s Speech and Million Dollar Quartet.

Following his appearance as the lead in the hit West End Show 'Chitty Chitty Bang Bang' at London's Palladium, Jason decided to take the risk and appeared on ITV's 'I'm A Celebrity Get Me Out of Here' which re-launched his pop career re-igniting his old fan base and creating a new one and has remained at the top ever since.

He then appeared with Martine McCutcheon on the ITV drama 'Echo Beach' and as the lead in the West End in 'Priscilla, Queen Of The Desert' to rave reviews.

Jason Donovan continues to tour the UK with his one-man ‘Audience with’ show, which includes his hit songs and banter with the audience.

Clients often ask about purchasing books for giveaways and delegate packs. Below you’ll find a selection of products by Jason Donovan. Click the images to view on Amazon's website. For bulk orders, please speak with your Booking Agent.

How to book Jason Donovan for your event