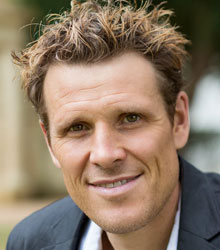 Winning Gold at Athens, in one of the most heart stopping races in Olympic history, confirmed James Cracknell as one of the most successful and inspirational athletes of the modern era. A double Olympic Champion, and World Record holder, James is one of Britain's true sporting heroes.

James won his first Olympic Gold and the hearts of the nation in the legendary coxless four in Sydney 2000, together with Steve Redgrave, Matthew Pinsent and Tim Foster. After four years of intense training and determination, James repeated this incredible performance in Athens, winning his second Olympic Gold medal in a nail biting final with Matthew Pinsent, Steve Williams and Ed Coode.

In July 2010 James Cracknell was involved in a road accident that would have life changing consequences. He was hit from behind by a petrol tanker whilst cycling during an attempt to cycle, row, run and swim from Los Angeles to New York within 18 days. The driver was on his mobile phone at the time, when the accident happened early morning on a quiet stretch of road at a small town in Arizona, USA. James has attributed his survival to the fact he was wearing a cycle helmet at the time, which was shorn clean in two.

As a result of the crash James suffered a contrecoup injury to the frontal lobes of his brain, which has left him with epilepsy and a changed personality. Since the accident he has been conspicuous in advocating the use of bicycle helmets.

James' outstanding sporting achievements, intelligence and sense of humour have made him a popular choice of motivational speaker, either for conferences or after dinner. He has the ability to tailor his experiences to captivate and motivate a variety of audiences; speaking with a relaxed yet informative style and offering a young fresh approach to conference speaking which is always well received.

A former teacher and Masters graduate, James Cracknell's wide appeal means that he is as likely to be found on Children's BBC as he is on a debate for Radio 5 and has presented gongs at the BAFTAS and the Disney Kids Awards. Passionate and articulate, James is keen to encourage the growth and development of sport where he can.

James is admired by the press and public for his style and success, and has been the recipient of many lifestyle awards including being named as one of 2005's best dressed men in Britain by the Mail on Sunday.

James is a keen marathon runner, completing many marathons for chosen charities including the London Marathon in 2015, 2016 and 2017. In 2017 he broke his marathon PB, running an impressive 2:43:12

In 2019 James made history when he became the oldest competitor in the Boat Race, winning alongside his Cambridge team mates.

James Cracknell's speaking style is relaxed, bright and extremely charismatic. With his natural style and sense of humour, audiences really warm to his unique laid back approach.

As a key member of one of Britain's most successful teams, James has dealt with having the expectations of a nation on his shoulders and he offers a rare and amusing insight into how this pressure manifests itself in the boat.

He is happy to work to a client's brief and will incorporate specific messages or even tailor his existing material to highlight certain business areas if preferred. However James Cracknell’s standard presentation, that is naturally adapted with each individual audience in mind, is truly inspiring and he never fails to engage his audience.

In “An Evening With James Cracknell”, the double Olympic gold medallist and 6 times world champion oarsman shares the highs and lows of his career. Whether he giving a straight forward talk or talking part in a structured Q&A session, James’ talks about how he kept himself motivated following the disappointment of missing the cut for inclusion in the boat in Barcelona in 1992 and then falling ill in the athlete’s village in Atlanta in 1996.

He dedicated the next 8 years to fulfilling his ambition to secure for himself a place in the boat in Sydney in 2000 and Athens in 2004 and attaining top spot on the podium on both occasions. In so doing, James Cracknell demonstrates the perseverance and dedication required to become an Olympic champion.

He also explains the hurdles that elite sport personalities have to overcome once they retire from professional sport and need to fill the void. In James Cracknell’s case, this took the guise of setting himself extreme challenges; the risks of which were highlighted when he was involved in a highly publicised accident whilst cycling across the USA in 2010, and left him with life-changing injuries.

Clients often ask about purchasing books for giveaways and delegate packs. Below you’ll find a selection of products by James Cracknell OBE. Click the images to view on Amazon's website. For bulk orders, please speak with your Booking Agent.

How to book James Cracknell OBE for your event