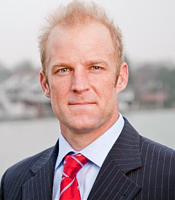 From the highs of an illustrious career spanning 15 years, to the lows of missing out on Olympic glory due to injury in 2004, Alex Partridge is one of the most interesting and experienced athletes to have ever rowed for Great Britain.

Awarded the British Olympic Athlete of the Year in rowing in 2010 for his contribution to excellence in the sport, his hard work saw him consistently achieve podium finishes which culminated in another medal, this time Bronze, rowing in the Men's Eight at one of the most pulsating races of the London 2012 Olympics.

Alex initially started rowing when he was 15 and progressed quickly through to the senior ranks when in 2004 he won the GB Rowing Selection Trials to gain a place in the Men's Four with Pinsent, Cracknell and Williams. Disappointment struck when he suffered cracked ribs and a collapsed lung and was forced to withdraw from the Athens Olympics just weeks before.

The crew went on to win an Olympic Gold Medal, naming their boat after Alex. After rehabilitation and four more years of hard work, 2008 offered Alex a chance to achieve what he missed out on 4 years earlier, winning an impressive Silver Medal at Beijing Olympics.

Having experienced the highs and lows of professional sport, Alex Partridge is a double Olympic medalist, multiple World Champion and has a compelling story to tell.

Following the London 2012 Games, Alex dived straight into the corporate motivational speaking circuit, delivering motivational speeches to varying audience sizes. Inspiring others to strive for world-class performance, he brings his own experience to bear on the greater challenges of sustaining world-class performance for the long term and overcoming adversity which may befall an individual or an organisation.

Nominated athlete's representative for the men's rowing team for the previous two years; Alex Partridge can provide his firsthand account of the systems which motivate high-performance teams to excel. He can also discuss the human side of leadership, and how to break down dreams into achievable goals.

How to book Alex Partridge for your event