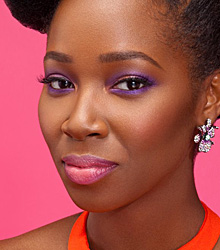 Book Jamelia
add to shortlist
About

Jamelia is one of the UK's most successful female solo artists, having signed her record deal with EMI aged just 15. She went on to write, record and release three albums, two of which of which achieved gold certifications (Drama&Walk With Me) and the other went double-platinum (Thank You). These albums collectively produced 10 top 40 singles (seven of which were Top 10's) in the UK.

The success of Jamelia's albums in the UK was repeated internationally and took her all over the world,travelling and performing on every continent, achieving number 1's as far flung as Australia & Thailand. Jamelia has also toured with Destiny's Child, Usher & Justin Timberlake on their stadium tours.

Her hits include 'Thank You', the catchy 'Superstar' and 'See It In A Boy's Eyes' (which she co-wrote with Coldplay's Chris Martin) – three Top 5 hits from just one album! Throughout her music career Jamelia has been the recipient of many prestigious awards, includingfour Mobo awards, An Ivor Novello, A Cosmopolitan award, A 'Q' Award and an Elle Magazine Style Award. Jamelia has been nominated for several Brit & MTV awards.

After 10 years in the music industry, Jamelia decided to embark on a new career path, in television. She began by making appearances on panel shows such as “8 Out of 10 Cats”,”Never Mind the Buzzcocks” and”Would I Lie to you?”. She enjoyed the freedom television gave her, in particular, the freedom to allow her personality to shine.

In the years to come she would continue to work in television in various capacities. Presenting documentaries as diverse as “Whose Hair is It Anyway” which tackled the realities behind the human hair extension industry to "Shame About Single Mums” which explored the history in the UK of the shame associated single motherhood, a subject close to her heart as she was raised by a single mother and is one herself. In 2013, Jamelia joined the panel on ITV's daytime show Loose Women, and also presents pieces for its sister show, This Morning.

Another string to Jamelia's bow, is acting. In 2009 she had played herself alongside Daniel Mays in the CH4 comedy Plus One, In 2012 she starred in an episode of the improvised ITV show Crime Stories, and in 2013 played Aimee in the BBC's very popular,Death In Paradise. Jamelia starred in a feature film by Hungarian director Robert Koltai along with movie legends, Tamer Hassan, Vinnie Jones & Michael Madsen. In 2016 Jamelia played the role of Helena Wales in an episode of the BBC's Doctors, and her latest project is the short film by Fredi Nwaka,The Diary in which she plays the lead character, Detective Anisa Powell.

How to book Jamelia for your event