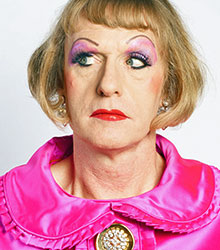 Grayson Perry is an award-winning artist who works in a variety of media, including embroidery and photography, yet he is best known for his ceramic works: classically shaped vases covered with figures, patterns and text. In 2003, he became famous as the first ceramicist to win the Turner Prize. In 2014 he was awarded a CBE.

Grayson was born in Chelmsford in 1960 and went on to study at Braintree College of Further Education and at Portsmouth Polytechnic. He has written and presented documentaries including RTS Award-winning Why Men Wear Frocks, in which he examined transvestitism and masculinity in the 21st century; BAFTA-winning All in the Best Possible Taste with Grayson Perry and last years Who Are You? which led to the accompanying artwork from the series being housed in the NPG, a first for the Gallery.

Grayson Perry continues to take on a diverse range of projects from guest appearances on shows such asHave I Got News for You andThe Culture Show, and talks such as Myths of the Artist at the Tate Modern, to his recent tour of Bavaria with his teddy bear, Alan Measles for BBC Radio 4'sGrayson on His Bike.

Most recently alongsideWho Are You?Grayson delivered the prestigious Reith Lectures for BBC Radio 4, making history in the process, as he became the first artist to deliver the lectures.

Grayson Perry speaks on a number of subjects surrounding the arts including creativity, individuality and identity. He also speaks about his exhibitions and his artwork.

Grayson Perry is such a fantastic speaker: a performer with gags like a stand-up, but also a thinker with a point to make.

Clients often ask about purchasing books for giveaways and delegate packs. Below you’ll find a selection of products by Grayson Perry CBE. Click the images to view on Amazon's website. For bulk orders, please speak with your Booking Agent.

How to book Grayson Perry CBE for your event