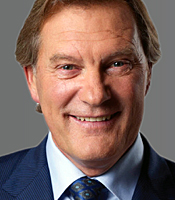 Considered one of the most gifted footballers of his generation, Glenn Hoddle followed a decorated playing career with several successful managerial stints before opening his own academy to develop the game at grassroots level.

Inducted into the National Football Museum Hall of Fame in 2007, Glenn's unique combination of flair, balance, vision and control made him one his generation's most revered players. After a playing career that saw him lift the UEFA and FA cups before becoming one of the first Englishmen to play successfully abroad, Glen has had several successful stints in management, including the English national team during the 1998 World Cup in France.

Glenn has also successfully turned his hand to punditry, becoming a regular on Sky Sports coverage, and set up his own football academy in Spain to give a second chance to English youngsters who have been released from academies.

Glenn's career saw him appear for Tottenham, Chelsea, Monaco and England. He is a former manager for Spurs, Chelsea, Southampton, Wolves and Swindon.

Glenn Hoddle is a true football legend that creates excitement across generations and has the ability to speak with great knowledge and passion about football.

Clients often ask about purchasing books for giveaways and delegate packs. Below you’ll find a selection of products by Glenn Hoddle. Click the images to view on Amazon's website. For bulk orders, please speak with your Booking Agent.

How to book Glenn Hoddle for your event