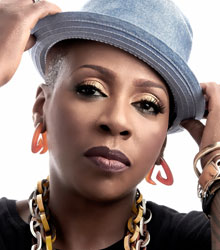 Gina Yashere was born and raised in London, of Nigerian parents, and previously worked as an elevator engineer for Otis.

Gina is an established stand up and TV star, with appearances on iconic TV shows such as Live At The Apollo & Mock The Week, as well as creating & performing popular comedic characters on The Lenny Henry Show. She broke onto the American comedy scene with her appearances on Last Comic Standing (NBC),where she made it to the final 10,and then never went home! Gina went on to be named one of the top 10 rising talents in the Hollywood Reporter.
She is also known in the US for being the only British comedian to ever appear on the iconic Def Comedy Jam, as well as for her hilarious appearances on The Tonight Show (NBC) & Crashing on HBO.

Gina self produced 3 separate 1 hour Stand Up Specials, Skinny B*tch, Laughing To America, & Ticking Boxes which were showcased on Showtime, Starz and Sirius XM. Gina's 4th stand up special was streamed on Netflix, as part of The Stand ups, season 2, & received rave reviews. She is also regularly featured on Comedy Central as the British Correspondent on The Daily Show with Trevor Noah and is in demand as a voice artist.

In addition to her TV and voice over work Gina tours non-stop around the world, including making numerous sold out appearances in Asia where is a a highly sought after comedian. It’s a wonder she found the time to pick up her 4th award in a row for “Best Comedian” at the recent Black Entertainment & Comedy Awards (UK).

Clients often ask about purchasing books for giveaways and delegate packs. Below you’ll find a selection of products by Gina Yashere. Click the images to view on Amazon's website. For bulk orders, please speak with your Booking Agent.

How to book Gina Yashere for your event