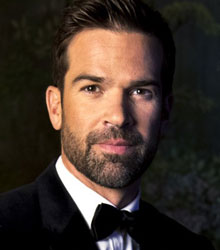 Gethin Jones started his television career on Welsh Channel S4C between 2000-2003 presenting a variety of shows. However, it is possibly presenting 'Blue Peter' that propelled Gethin into the mainstream media. He was also a semi-finalist in BBC1's Strictly Come Dancing in 2007.

Gethin presented 'Blue Peter' for over 3 years before leaving CBBC's flagship show in 2008. His time on Blue Peter saw him take on the most extreme, wonderful, scary and strangest challenges of his life. He broke 4 world records, completed 3 life threatening tasks and fulfilled a lifetime ambition of flying with the Red Arrows. He visited 32 countries taking on the most extreme and obscure challenges, his biggest moment being when he became the first ever civilian to finish the UK Royal Marine Commando 30 mile Yomp.

Gethin has presented a variety of high-profile shows including 71 Degrees North andBBC1’s Remembrance, which was filmed in the heart of the Green Zone in Afghanistan.

In 2010 Gethin took part in 'Soccer Aid' for ITV1 playing for the Rest of The World Team, but his passion is for Rugby, and he is a self-confessed rugby geek. Not only has he presented a number of rugby shows, he has even taken his knowledge to Celebrity Mastermind.

How to book Gethin Jones for your event