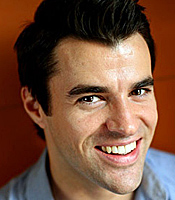 Steve Jones is a Welsh television presenter who hosted the American version of 'The X Factor'. He started his career as a model for Esquire before moving to presenting, fronting programmes such as '99 Things To Do Before You Die". Since he has become a regular feature on Channel 4's weekend entertainment programme 'T4'.

In 2006, he worked on Transmission with T-Mobile with XFM DJ Lauren Laverne and then in February 2009 he made his BBC One debut hosting 'Let's Dance for Comic Relief' with Claudia Winkleman, a role which he has reprised for February 2010 and 2011. Early 2009 saw him presenting Sky 1's 'Guinness World Records Smashed' with Konnie Huq. During the same year, he began presenting BBC TV quizshow 'As Soon on TV'.

Steve Jones has also featured in acting roles in 'Angus, Thongs and Perfect Snogging' and a minor role as himself in two episodes of the TV series 'Plus One'.

How to book Steve Jones for your event