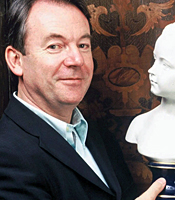 As well as being a recognised expert in his chosen field, Eric Knowles is a well-known face in the world of antiques, particularly to viewers of the BBC's Antiques Roadshow. He appears to be one of those rare individuals who is able to share his considerable knowledge in a way that is exciting and easy to understand.

He was born in Lancashire in 1953 and worked in both engineering and for a firm of antique shippers in the early 1970's. Eric's love of antiques, inherited from his parents, came to the fore in 1976, when he joined Bonham's, the London auctioneers, working first as a porter in the ceramics' department, before becoming head of the department in 1981.

In 1985, Eric Knowles was offered a full directorship at Bonham's. As a Fellow of the Royal Society of Arts, Eric has become a leading authority in the following fields: European and Oriental Ceramics from the Seventeenth to the Twentieth Century; the glass of Tiffany and Lalique; and Nineteenth and Twentieth Century Decorative Arts. Today he looks after museum liaison and several of his finds can now be seen in national museums.

Eric Knowles has also become a regular face on TV. His appearances include The Twentieth Century Roadshow, Crimewatch UK, Selling the Family Silver, Going For A Song, The Great Antiques Hunt, The Antique Inspectors, It's a Gift and You Can't Take It with You, and he is the resident antiques expert on This Morning. He was a contestant on Celebrity Mastermind Christmas Special in 2004 where he narrowly missed winning the trophy by 2 points!

He has recently filmed a new historical renovation series for Discovery Home & Leisure called The House That Mackintosh Built, property series Period Property and Restoration Man. As well as presenting and appearing on radio (including regular appearances on Radio 2) and TV, he has written books on subjects such as Victoriana, Art Nouveau, Art Deco and Royal Memorabilia. The famous pottery of Royal Doulton has launched the Eric Knowles character jug.

In 2005 Eric became the resident Sunday Times Antiques Expert, and he remains a frequent contributor to the BBC Homes and Antiques magazine and has written several articles for the Evening Standard supplement, Home and Property and The Sunday Times' Home.

Eric Knowles has a rare gift for story telling, sharing his knowledge in a way that both enlightens and entertains - and in addition to after dinner speaking, Eric is the host of a highly entertaining and informative game; Passing around a number of real antiques, from clocks to pictures and oddities, he challenges guests to work out each object's age, use, country of origin and likely price in the sales room. No matter what your knowledge of the antiques market, Eric brings the pieces to life. The game has been devised to work in a variety of formats, for audiences from thirty to one thousand. It can be played independently or around tables as a team exercise - in which those who think they know all the answers are often proved wrong. Where there has been advance notice, Eric is also happy to value anything guests may bring along.

Eric Knowles is also a Fellow of the Royal Society of Arts and an Ambassador for the Prince's Trust. He is associated with several other charities including Headway, FABLE (For a better life with epilepsy), the New Mozart Orchestra and Wycombe Scanappeal.

Clients often ask about purchasing books for giveaways and delegate packs. Below you’ll find a selection of products by Eric Knowles. Click the images to view on Amazon's website. For bulk orders, please speak with your Booking Agent.

How to book Eric Knowles for your event