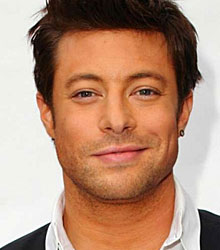 Whilst on the audition circuit, Duncan James met Lee Ryan, Simon Webbe and Antony Costa. Discovering their shared musical tastes and compatibilities, the logical step was to create music and a style that suited the guys’ talents... Blue was born and immediately signed to Innocent Records.

Blue was an instant success, the timing was perfect. They exploded on to the scene in May 2001 with the unforgettable All Rise debuting at number 4 in the music charts, and their follow up single Too Close went straight in at number 1.

It was a meteoric rise to fame for the foursome, becoming the hottest new act to emerge in the UK in years with their unmistakable sound of R&B influence, pop and melodious ballads. Blue has amassed huge commercial success, racking up 40 No.1 singles worldwide, 3 No.1 UK albums and sales of over 13 million records.

The guys decided to take a break from the band to pursue other interests. Duncan was asked by Sir Andrew Lloyd Webber to record a duet with Pop Opera sensation Keedie - I believe My Heart, from A Woman in White, which reached No.2.

In addition to pursuing his music talents, Duncan has been a regular host of The National Lottery and has presented on Soapstar Superstar, Capital FM's Party in the Park, City Hospital, T4, The Clothes Show, GMTV's Entertainment Today and on Capital Radio where he hosted Duncan's JukeBox

In 2007, Duncan took up the challenge of competing in ITV's Dancing on Ice where he became a finalist and participated in the following sell out tour in arenas across the UK.

Duncan was thrilled to be offered the part of Billy Flynn in the hit musical Chicago, which he starred in during summer 2007, reprising the role for an additional 10 week run from December to February 2008.

He then went on to film Plus One a hilarious sitcom from Kudos Productions commissioned for Channel 4. The show was chosen as the winner from 6 pilots screened in the Channel 4 Comedy Showcase. Duncan plays a tongue in cheek characterisation of his Blue persona named throughout as 'Duncan-from-Blue' also starring the talents of Daniel May & Nigel Harmon.

How to book Duncan James for your event