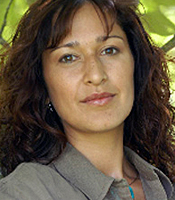 Having trained as a zoologist, Dr Sanjida O'Connell has produced and directed a diverse range of science programmes and has begun, more recently, to work as a presenter. Presenting credits include BBC1's Natural History of Great Britain, The British Isles: A User's Guide (BBC4), Hands on Nature (BBC2) and Nature's Calendar (BBC2).

As a journalist, Sanjida contributes to The Times, Telegraph, Guardian, Independent, BBC Focus and is the TV reviewer for BBC Wildlife magazine.

She has also written two novels, Angel Bird and Theory of Mind, which received the Betty Trask award for romantic fiction, as well as two non-fiction books, Mindreading: How we learn to love and lie and, most recently, Sugar: The Grass that Changed the World. She was shortlisted for Asian Woman of Achievement in 2004.

Clients often ask about purchasing books for giveaways and delegate packs. Below you’ll find a selection of products by Dr Sanjida O'Connell. Click the images to view on Amazon's website. For bulk orders, please speak with your Booking Agent.

How to book Dr Sanjida O'Connell for your event