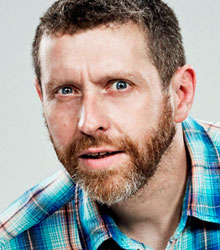 With a distinctive style of storytelling, Dave Gorman has emerged as one of the most unique, original and exciting comedy minds that the UK has produced. Not only is he one of the biggest contemporary comedians and sharpest raconteurs but he is also a hugely successful author.

His tales of travelling the world in his one man shows, Are You Dave Gorman? (which later became the television series The Dave Gorman Collection) and Dave Gorman's Googlewhack Adventure have dazzled live audiences and broken box office records across the globe, establishing Dave as one of the hottest live international performers.

Dave appeared as a team captain on the second series of Rob Brydon's Annually Retentive (BBC Three) and has appeared on The Daily Show, filming six segments with Jon Stewart (More 4). His radio show Genius for BBC Radio 4 was made into two successful television series for BBC Two. His 90 minute documentary, Dave Gorman in America Unchained broadcast on More 4 in 2008 and delivered more than six times the channel's average viewing figures for the slot. The film also won the Audience Award for Best Documentary Feature at the Austin film festival.

He has won two BAFTA Awards as a writer on the Mrs Merton Show (BBC One). In addition he has made appearances on The Late Show With David Letterman (CBS), The Frank Skinner Show (ITV1), Absolutely Fabulous (BBC One), Never Mind The Buzzcocks (BBC Two), They Think It's All Over (BBC One) and acted in Steve Coogan's feature film 24 Hour Party People.

Dave has written many books. Are You Dave Gorman? which climbed to number one on the Sunday Times best seller list, Dave Gorman’s Googlewhack Adventure, America Unchained, Dave Gorman vs the Rest of the World and Too Much Information.

A prolific live performer and Dave has completed numerous sold out and critically acclaimed national and international tours.

Clients often ask about purchasing books for giveaways and delegate packs. Below you’ll find a selection of products by Dave Gorman. Click the images to view on Amazon's website. For bulk orders, please speak with your Booking Agent.

How to book Dave Gorman for your event