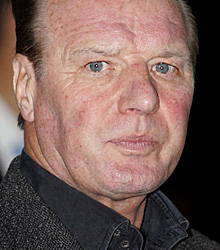 Affectionately known as 'Harry', Dave Bassett plied his trade at several clubs with considerable success. He is probably best known for guiding his unfashionable Wimbledon side to the First Division in the 1980s after taking over from Dario Gradi at Plough Lane in 1981.

His credentials as a hard-working and successful motivator are well-renowned and it was hardly surprising when Leicester City turned to him to help lift them from the bottom of the Premiership table following Peter Taylor's exit in October 2001.

Dave Bassett ended his managerial career on a day of very mixed emotions on April 6 2002. Having received a crystal vase from Sir Alex Ferguson on behalf of the League Managers Association in recognition of his achievement in reaching 1000 games as a league manager ahead of his last game in charge of Leicester City, Bassett saw his side beaten by Manchester United at Filbert Street condemning them to relegation from the Premiership.

Bassett had already agreed to hand over the reins to his assistant Micky Adams, formerly manager of Brighton, and received a standing ovation from the Leicester fans who acknowledged his feat in reaching the landmark that has only been achieved by five other managers in English football: Alec Stock, Sir Matt Busby, Jim Smith, Graham Taylor and Dario Gradi.

'Harry' remains a valued, extremely committed and well-respected member of the League Managers Association. He is also one of a trio on the panel that votes for the Scottish Mutual Performance of the Week, alongside Sir Alex Ferguson and Howard Wilkinson.

As one of football's most colourful characters, Dave Bassett is best-known as the man who led Wimbledon to their FA Cup triumph in 1988, and his talents are renowned throughout the football league.

In his open and honest after dinner speech, Dave talks candidly about the stories in his 2002 autobiography, Settling The Score, that have been the hallmark of his amazing career.

He reveals the truth behind his four days in charge of Crystal Palace, his fiery relationship with Sir Elton John, as owner of Watford, the boardroom battles during his time at Sheffield United and also the chain of events that led to his rejection of Manchester City.

Dave also explains his philosophy of football which has led to his huge success and made him one of the most interesting and insightful personalities in the history of the game.

Clients often ask about purchasing books for giveaways and delegate packs. Below you’ll find a selection of products by Dave Bassett. Click the images to view on Amazon's website. For bulk orders, please speak with your Booking Agent.

How to book Dave Bassett for your event