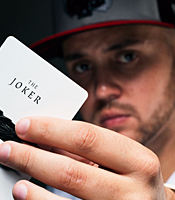 The Man Beneath The Cap - Damien O'Brien's wizardry has no limits or boundaries, utilising all variations of magic from cards to coins, watches to fire, even mind control and levitation. A natural performer mixed with boyish charm, his magic leaves even the biggest sceptic in the room bewitched.

First introduced to magic at the age of 12 by a fellow magician, Damien picked up the craft after learning a few tricks. From there he took his unique skill set to the streets to perform for the unsuspecting public. Their reactions were unbelievable, sealing Damien's fate as a professional magician. He says: "There's no better buzz than pulling off an amazing illusion right under someone. To watch their childlike wonder, there's no other word to describe it but... magical”.

Honing his skills as both a showman and entertainer, Damien O'Brien began gigging in local venues, until 2005, when a impromptu performance outside a London night club kick-started a chain of events that would catapult him into the big leagues. Using his mystic arts and improvised style of magic, Damien managed to impress a certain club owner, so he would allow this talented young magician into his private party to wow his guest list of celebrities, reality TV stars and talent agents.

Needless to say, he was a massive hit and was asked to become a regular fixture. This spurred a domino effect within the showbiz party circuit, where Damien had free reign to showcase his abilities to some of the world's most influential and famous celebrities.

How to book Damien O'Brien for your event