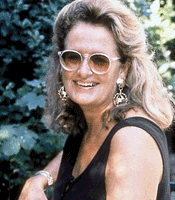 Clare Ferguson is one of Europe's most prominent food stylists, consultants and culinary advisors, working for a variety of major international food and wine producers. Her colourful and gutsy personality ensures she is constantly in demand as a food columnist, consultant, broadcaster, commentator and guest chef.

London based, Clare was born and bred in New Zealand, and has worked in the food industry in England and Europe. Clare believes passionately in the enjoyment of eating and the production and preparation of high quality, good looking food. She travels widely in search of new ideas. Clare has worked for over two decades as one of Europe's top rated food stylists for stills and TV commercials and this work has taken her all over the world.

Clare has been Contributing Food Editor to both Elle and She magazines. She was food consultant/stylist for the BBC series Madhur Jaffrey's Far Eastern Cookery and also for the BBC's runaway success Two Fat Ladies (early programmes). She was celebrity chef on 78 shows of the culinary quiz show What's Cooking? and appeared regularly on Carlton Food Network Daily and Granada Sky Broadcasting programmes. She has contributed to many newspapers and magazines.

Clients often ask about purchasing books for giveaways and delegate packs. Below you’ll find a selection of products by Clare Ferguson. Click the images to view on Amazon's website. For bulk orders, please speak with your Booking Agent.

How to book Clare Ferguson for your event