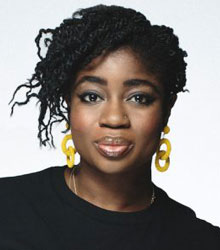 Clara’s show has seen her interview the world’s most prolific artists from Jay-Z, Ariana Grande, Kendrick Lamar and Pharrell Williams to name but a few. She was also the host of the iconic BBC Radio 1 Chart Show – the second woman to do so since the show first started in 1967.

A respected face on our screens, 2017 saw Clara co-hosting Top Of The Pops Christmas, a bucket list job making her the first new host of the show in over a decade.

She’s hosted the ITV2 coverage of The BRIT Awards for the second year running, handing out awards at the ceremony for Best International Male Solo Artist and British Breakthrough Act. 2018 marked her 3rd year on the judging panel for the prestigious Mercury Music Prize and this year announced the winner to it’s nationwide audience.

A lover of film and entertainment made Clara the perfect newest addition to the line up of The BBC Film show alongside Lauren Laverne and Charlie Brooker, presenting the usual show and the 2018 Oscar special.

No stranger to the red carpet Clara joined the BAFTA TV Awards presenting team this year, covering the red carpet live and backstage winner interviews for the official BAFTA channels. Her natural aptitude for this was extended to the film world, hosting the European and world premieres for Baby Driver, Tomb Raider, Kingsmen and Marvel’s box office breaking Black Panther!

With live music being her passion, Clara is part of the core presenting team on BBC2 and BBC4 for their coverage of Radio 1’s Big Weekend and Glastonbury, with the last two years seeing her introduce Adele and Ed Sheeran from the pyramid stage to millions of people worldwide.

How to book Clara Amfo for your event