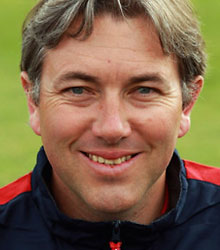 Chris Silverwood, now based down in Newmarket, plays for Middlesex after 13 years with Yorkshire.'Silvers', as he is known, has taken more than 500 First Class wickets, played for England at Test and One Day level and has enjoyed a career spanning some 15 years.

Educated at Garforth Comprehensive School in Leeds, Silverwood made his debut for Yorkshire in 1993. While there the club won the County Championship in 2001 and the C&G Trophy in 2002.

Making his Test debut against Zimbabwe in 1996, Chris went on to sign for Middlesex in 2006.

His stories are not only punctuated with good old cricketing anecdotes but also some fascinating insights into the world of horse-racing as Chris himself owns a stable which is highly regarded amongst the racing world and has attracted quite some attention not least from the Channel 4 racing team.

Silvers preference is for half speech, half Q&A therefore combining an introductory speech before opening it up to the floor.

How to book Chris Silverwood for your event