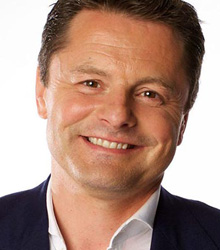 From the USA Masters Golf to the World Cup, to Royal Ascot and Wimbledon, Chris Hollins is recognised as one of television's most popular sports presenters.

Chris was the main sports reporter on BBC Breakfast from October 2005 to March 2012, on air on Monday to Thursday mornings as well as a regular co-host of the show. He is one of the presenters of BBC1's Watchdog as well as The Food Inspectors and Cash in the Attic for BBC1 and Cash in the Celebrity Attic for BBC2. Chris is also the host of history series Find My Past for Yesterday and BBC2's arts series Show Me The Monet; presenter of Dirty Tricks of the Tradesmen for BBC1 and co-host of The Great British Weather for BBC1. He is probably best known as the winner of Strictly Come Dancing 2009.

Before moving to BBC Breakfast, Chris Hollins was sports presenter for BBC News 24 and also reported for Grandstand and Football Focus. He began his career at Sky Sports in 1994, followed by spells at Channel One, GMTV, Meridian and Channel 5.

A talented sportsman, Chris played football for QPR and Aldershot. (His father is John Hollins MBE, the former Chelsea, Arsenal, QPR and England footballer.) He also took part in Sky One's The Match, playing a full 90 minutes on the celebrity side.

After graduating from Tonbridge School in 1989, he attended the University of Durham and later Oxford University where he gained Blues in both cricket and football.

Chris has appeared in a cameo role in the feature film Run Fat Boy Run; an experience that he thoroughly enjoyed. Always up for a challenge, Chris Hollins has taken part in BBC1's Celebrity MasterChef and learnt a whole ice skating routine for BBC1's New Year's Eve celebrations! 2009 brought a whole new challenge however, as Chris took part in Series 7 of Strictly Come Dancing for BBC1. With 16 couples, 14 weeks, 654 hours of training and 17 dances to learn, Chris was the only contestant to never be in the dance-off and his popularity with the public finally led to him lifting the glitterball trophy! Chris also took part in the Strictly tour at various venues around the UK in early 2010.

In 2011, Chris Hollins was part of the BBC team covering The Royal Wedding. He also took part in Celebrity Antiques Road Trip for BBC Children In Need.

Chris was such a delight to work with and he 100% helped to calm my colleague’s nerves which made their little double act work well on the stage.  Our guests have all commented on how successful the evening went and how much they enjoyed themselves.

How to book Chris Hollins for your event