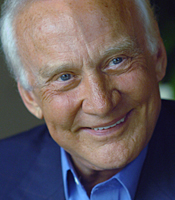 Since retiring from NASA and the Air Force, Col. Buzz Aldrin has remained at the forefront of efforts to ensure America's continued leadership in human space exploration. He devised a master plan for missions to Mars – the “Aldrin Mars Cycler” – a spacecraft transportation system with perpetual cycling orbits between Earth and Mars. Dr. Buzz Aldrin has received three US patents for his rocket systems and schematics.

Buzz was educated at the US Military Academy at West Point, graduating third in his class with a B.S. in mechanical engineering. He then joined the Air Force where he flew F86 Sabre Jets in 66 combat missions in Korea, shot down two MIG-15′s, and was decorated with the Distinguished Flying Cross. After a tour of duty in Germany flying F100's, he went on to earn his Doctorate of Science in Astronautics at MIT and wrote his thesis on Manned Orbital Rendezvous.

Selected by NASA in 1963 into the third group of astronauts, Buzz Aldrin was the first with a doctorate and became known as “Dr. Rendezvous.” The docking and rendezvous techniques he devised for spacecraft in Earth and lunar orbit became critical to the success of the Gemini and Apollo programs, and are still used today. He also pioneered underwater training techniques, as a substitute for zero gravity flights, to simulate spacewalking.

In 1966, on the Gemini 12 orbital mission, Buzz performed the world's first successful spacewalk, overcoming prior difficulties experienced in all American and Russian extra-vehicular activity (EVA), and set a new EVA record of 5 ½ hours.

Then, on July 20, 1969, Buzz Aldrin and Neil Armstrong made their historic Apollo 11 mission, becoming the first two humans to set foot on the moon. They spent 21 hours on the lunar surface and returned with 46 pounds of moon rocks. The largest worldwide television audience – an estimated 600 million people, witnessed this unprecedented heroic endeavor.

Upon returning from the moon, Buzz was decorated with the Presidential Medal of Freedom, the highest American peacetime award. A 45-day international goodwill tour followed, where he received numerous distinguished awards and medals from 23 other countries. Named after Buzz are Asteroid “6470 Aldrin” and the “Aldrin Crater” on the moon.

Dr. Buzz Aldrin reaches out to today's youth with his illustrated children's books: Reaching for the Moon and Look to the Stars, both New York Times best sellers. His 2009 New York Times best-selling autobiography, Magnificent Desolation, has inspired the lives of readers worldwide. In addition, he has authored two space science-fact-fiction novels: Encounter with Tiber and The Return. His nonfiction books include the bestselling Mission to Mars: My Vision for Space Exploration.

As one of the leading space exploration advocates, Buzz continues to chart a course for future space travel from Planet Earth to the moon and on to Mars.
His recent turns on Dancing With The Stars, 30 Rock, and WWE Raw Live are helping to keep space on the forefront of everyone's minds. His recent trip with President Barack Obama aboard Air Force One to the Space Conference at Kennedy Space Center was testament to how influential his opinions are to the lead decision-makers in Washington.

A genuine living hero and space pioneer, Buzz Aldrin is one of the most adventurous and bravest explorers in history. An evening in his company represents a unique opportunity to hear one of the foremost thinkers of our time.

Reach for the Stars
Sharing memories and insights from his momentous walk on the moon and his illustrious career, Buzz Aldrin encourages audiences to “reach for the stars” in life’s endeavors.

Buzz Aldrin’s Vision for the Future
Buzz Aldrin takes audiences on a journey into the future with his vision of a space-faring world where "citizen explorers" take space tours beyond lower-earth orbit and the Aldrin "Mars Cycler" space ship makes frequent stops for astronaut explorers on Mars.

In a word...OUTSTANDING! Buzz Aldrin received two standing ovations, embraced our live event, delivered his lines perfectly, and signed all 100 items with a smile. Our client really enjoyed meeting him. I found Buzz be courteous, self-deprecating, cooperative, and incredibly interesting. His entire participation in our event was an absolute delight.

Colonizing space is essential for the long term survival of the human race, and Buzz Aldrin's book shows us how.

Buzz Aldrin has been as far from Earth as any human being, and now he's leading the charge to go much farther, to our next epic destination: Mars.

Clients often ask about purchasing books for giveaways and delegate packs. Below you’ll find a selection of products by Buzz Aldrin. Click the images to view on Amazon's website. For bulk orders, please speak with your Booking Agent.

How to book Buzz Aldrin for your event