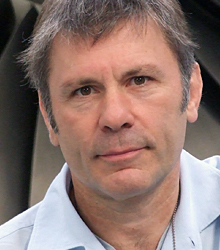 Bruce left Iron Maiden in 1993 in order to pursue a solo career, his passion for fencing and an interest in becoming a pilot. However, he rejoined the band in 1999 and has gone on to release four albums.

Bruce Dickinson was a pilot and Marketing Director for UK charter airline Astraeus until 2011, a company which leases aircraft to other carriers, and is the man behind Cardiff Aviation which he co-founded in 2012. The firm specialises in pilot training and the heavy maintenance of Airbus and Boeing commercial aircraft. He now regularly captains Iron Maiden's personalised Boeing 747-400, ‘Ed Force One’, which carries the band, the crew and their gear between shows on world tours.

As a sustainability-aware entrepreneur, Bruce is also an investor in Airlander 10, a UK built hybrid aircraft manufactured by Hybrid Air Vehicles that's a unique fusion of airship, plane and helicopter design. Its futuristic design and green thinking tackle head-on many of the problems that the aviation industry faces. He is also Chairman of Aeris aviation, the European distributor of Eclipse aircraft; an advanced light jet aircraft and the world's most eco-friendly and economical twin engine business jet.

Bruce Dickinson is very keen to speak on his projects, tying it in with business start-ups, entrepreneurship and business creativity. In addition, he also discusses the parallels between his music and business careers. Bruce is also able to deliver team building experiences focused around his flight simulator.

Bruce Dickinson is a charismatic and unique speaker at any business event. With a captivating style, humour and wisdom, his presentations entertain and motivate audiences.

Bruce is very keen to speak on his projects, tying it in with business start-up, entrepreneurship and business creativity. In addition, he speaks about the parallels between his music and business careers. His speeches are a whirlwind of ideas and inspiration that will energise and intellectually refresh listeners with a world-class delivery of the spoken word.

Bruce Dickinson delivers world class speeches to corporations around the globe. He compares the challenges of operating in the world of rock music and commercial aviation with those in the business world; from teamwork, forward planning and the ability to learn from setbacks and move on successfully.

He focuses on turning customers into fans – with information going viral all the time, which speaks volumes for business, with customers being loyal to a brand. Bruce enjoys the thrill of creativity and refreshes this spark in audiences across a range of business topics.

Clients often ask about purchasing books for giveaways and delegate packs. Below you’ll find a selection of products by Bruce Dickinson. Click the images to view on Amazon's website. For bulk orders, please speak with your Booking Agent.

How to book Bruce Dickinson for your event