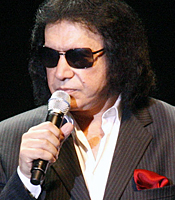 Fuelled by an explosive mix of makeup, costumes and attitude, rock band KISS burst onto the music scene in 1973 and has since gone on to become a rock institution with millions of fans around the world. But, I hear you ask, a rock star bass guitarist delivering keynote and motivational business talks on the global speaking circuit?

In 2012, Gene Simmons received a lifetime achievement award from Forbes for achievements not in music, but business. KISS has sold more than 100 million records and has broken every concert attendance record set by Elvis Presley and the Beatles. However, through Simmons' genius business acumen they became more famous - at least in terms of brand recognition - for the 2500+ licensing and merchandise agreements that KISS has in place, which makes the brand worth over US $1bn.

An immigrant from Israel arriving in New York as a child, Gene Simmons brought with him a strong image of the American dream. His own vision of that dream soon began to take shape. Simmons' product was not a rock and roll band but a rock and roll brand. KISS have generated more money from merchandising, than any other artist in the history of music. Simmons also capitalised on his business savvy to create an enviable track record as the founder and president of Simmons Records, a label that was manufactured and distributed by RCA/BMG. He has become an accomplished producer of motion pictures and television projects, including New Line Cinema's Detroit Rock City. Simmons hit The New York Times best seller list with his irreverent autobiography, KISS and Make-Up.

In his keynote business presentations, Gene Simmons talks about reality and illusion. He explains how to profit from illusion by using it to create value, and how important it is to first understand reality. Beginning with a video presentation, he shows how he has successfully applied these principles in the entertainment industry and how they can apply to any business model in any industry.

Just a few of the other areas Gene Simmons touches upon in his keynote presentations include the value of education and MBAs; personal branding; languages (he speaks five languages and considers this to be a huge - and growing - advantage when doing business on a global level); the welfare state (Sounds wonderful but it doesn't work. Governments hand out more money than they have to support welfare and they land in debt. Then they have to borrow money - and then there's interest on top of that. That's bad business. And it has created a culture of entitlement.

When I was growing up my mother went to work. There was no welfare. If you worked, you made money. If you didn't work, you had to figure it out - you'd go and wash dishes. The new breed of 20-year-olds don't want to do those jobs. So people from other countries come over and are thrilled to get the chance to wipe the floors”); politicians; economics; bankers and the global financial crisis (”Thank God we have lending institutions and banks. The planes that fly through the sky, the phones we use every day, the cars we drive, the houses we live in, the entire economy is all funded by firms who borrow in return for interest.”

Irrespective of whether we like the culture or the image currently associated with the banking sector, a healthy and efficient banking system is absolutely essential to our way of life); leverage debt and capitalism.

Off the charts great... epic... Gene Simmons not only delivered for Weldbend in a big, authentic way, he treated everyone great... down to earth, fun - what a gem... our client is ecstatic... thanks for all your help... hope we can work together again.

Clients often ask about purchasing books for giveaways and delegate packs. Below you’ll find a selection of products by Gene Simmons. Click the images to view on Amazon's website. For bulk orders, please speak with your Booking Agent.

How to book Gene Simmons for your event