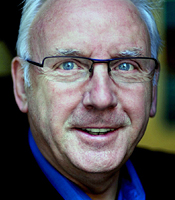 Pete Waterman is the most successful British producer-songwriter in pop history, he is also a television presenter, train enthusiast and lifelong entrepreneur with a wide range of business interests.

His extraordinary rise from a grave digger who didn't learn to read and write until his 30s to self-made multimillionaire is truly remarkable.

Pete's phenomenal success has led to some unusual activity, he once bought 18 Ferraris in one go and has been responsible for the purchase and renovation of the legendary locomotive The Flying Scotsman.

Never shy, Pete was followed enthusing over fresh talent on Pop Idol and Pop Stars - The Rivals. His arguments with Simon Cowell, Louie Walsh and DJ Neil Fox made for scintillating Television.

A senior statesman of the music industry with over forty years' experience, Pete Waterman has sold in excess of 500 million records around the world and been instrumental in the development of dozens of internationally successful acts such as Kylie Minogue, John Travolta, Rick Astley, Dead Or Alive, Bananarama and Steps.

Inspired by meeting the Beatles as a teenager, he worked as a DJ and A&R Consultant throughout the 1970s, finally establishing PWL, his own world-famous production company and record label, in the mid-1980s.

As one-third of the phenomenally successful Stock Aitken Waterman songwriting and production team, Pete scored an unrivalled run of global hits in the 80s and 90s, launching many new acts and collaborating with established music legends including Paul McCartney, Cliff Richard, Donna Summer and the Three Degrees.

Penning such pop classics as Never Gonna Give You Up and I Should Be So Lucky, PWL gained countless international industry awards, from BMI in the USA to the BPI in Britain and JASRAC in Japan.

Beyond music, Pete Waterman has a lifelong passion for the railways. His first proper job was as a fireman (stoker) on British Railways and today he is the proud owner of significant collections of commercial and historic locomotives — at one time including the legendary ‘Flying Scotsman' — and rolling stock, the largest O-gauge model railway in Europe and Just Like The Real Thing, his own model railway company.

Since founding the London & North Western Railway (LNWR) in 1993, Pete has continued to contribute massively to the preservation and development of this historic and essential industry, even leading the successful campaign for a National Skills Academy for Railway Engineering.

In 2001, Pete Waterman was made an Honorary Doctor of Business Administration by Coventry University for his services to the pop industry and, in 2004, an Honorary Doctor in Music by the University of Liverpool. In 2005, Pete was awarded the OBE for his services to music in the Queen's New Year's List and more recently was appointed Deputy Lieutenant of the County of Cheshire. In November 2011 Pete was given The John Peel Award by the Radio Academy for his outstanding contribution to UK music radio.

As he puts it in his subtly titled autobiography, I Wish I Was Me: 'Everything I Touch Turns to Gold', Pete Waterman is a larger than life entertainer in his own right and is available for after dinner speaking, motivational talks and hosting award dinners.

Just a quick note to thank Pete Waterman for his enthusiasm, interest and involvement in our event today. He was really easy to work with and everyone who attended were very impressed. Please pass on my thanks and gratitude for helping to make today's event memorable and easy to organise.

Clients often ask about purchasing books for giveaways and delegate packs. Below you’ll find a selection of products by Pete Waterman OBE. Click the images to view on Amazon's website. For bulk orders, please speak with your Booking Agent.

How to book Pete Waterman OBE for your event